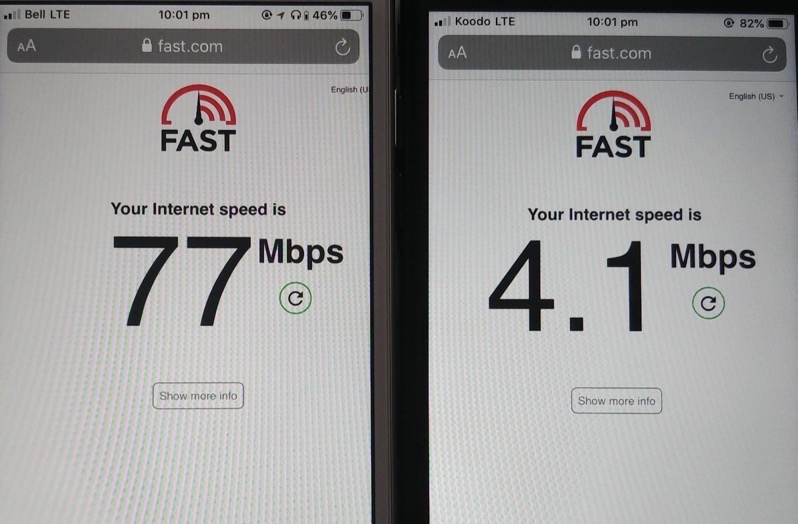 Numerous customers of Telus flanker brand, Koodo, notified iPhone in Canada recently of some strange issues regarding the latter’s cellular network, specifically when it came to streaming Netflix.

Some Koodo customers were seeing abnormally slow LTE speeds when watching Netflix, with speeds showing as slow as 4 Mbps download for example. Users vented on Koodo Mobile’s own community forums and on Howard Forums.

One user shared an example of two phones side-by-side, with one device on Bell seeing a Fast.com (owned by Netflix) speedtest of 77 Mbps download, while a Koodo phone showing 4.1 Mbps download next to it, in the same location.

According to Netflix, download speeds of 5.0 Mbps are recommended to get HD quality streaming and 25 Mbps for Ultra HD quality. Those with a large data plan seeking a higher quality stream were most likely unhappy about this speed issue.

Not everybody was affected by this throttling issue, but we reached out to Koodo for clarification on the issue yesterday.

A Koodo spokesperson replied this morning to say the issue is now fixed, noting, “Our team investigated and corrected the issue affecting Netflix during a network maintenance window earlier this morning.”

The fix by Koodo was noticed by those affected by the slowdown, now acknowledging their throttling issues over the network had indeed been fixed.