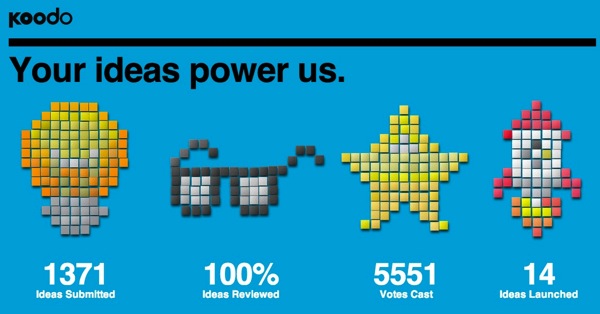 Koodo has officially relaunched their Ideas page, a crowdsourced forum for customers to suggest new ideas and provide feedback for the company. Users can vote on ideas they like and if Koodo is able to implement ideas, they will.

Here’s how they explain what Koodo Ideas is all about:

Koodo Ideas is an opportunity for you to help us make Koodo better. If you have an idea that you think will help us help you, share it! We want to hear about the changes you’d like to see happen, like something we should include on Self Serve, stuff you’d like to see on our Facebook page or even fixing a broken link on our website. Discuss and vote for ideas from others, too! We’ll review everything and think about which ideas are doable and will benefit our members most. While we can’t promise that all of the ideas will be launched, we’ll take the best and brightest into consideration.

To date, 14 ideas have launched, which includes the like of Visual Voicemail for iPhones (launched 8 months ago). Koodo continues to improve its customer service and last year J.D. Power ranked the company tops for the second year in a row.

Last year’s annual CCTS Report noted Koodo only had 1.45% of complaints received (parent company Telus had 6.45%; Rogers had 27.78%; Bell and 28.56%). Also, parent company Telus last month pulled out of the CWTA, part of the move described to enhance their ‘Customers First’ approach.

With Koodo Ideas, it’s just another way for customers to provide constructive feedback for the company to improve service. Not all ideas will be implemented but at least the conversation is there.

After Koodo launched a $45/50GB promo plan for Black Friday today, Rogers-owned Fido has now matched this offer. That’s according to reliable mobile insider ‘Thatdealguy’ on RFD, who noted the matching offer from Fido also is eligible for additional gift cards and rewards points bonuses at retailers such as Walmart, Best Buy, The Mobile Shop […]
IIC Deals
21 hours ago