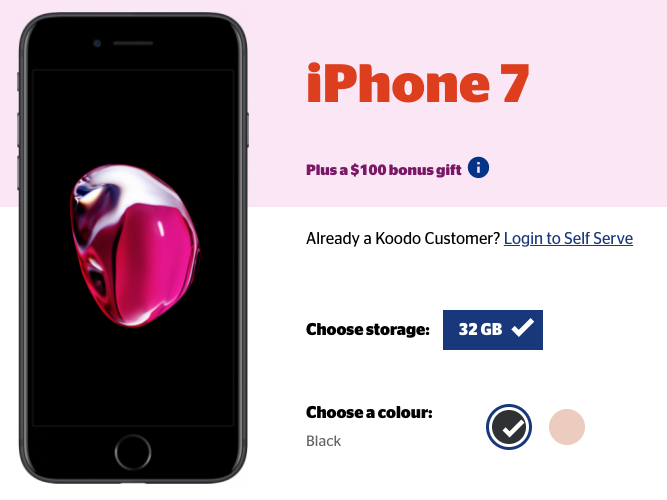 Koodo is offering Apple’s 32GB iPhone 7 for $0 upfront on Tab Medium and a $200 gift card and $50 device trade-in at participating retailers such as London Drugs out west and WOW Mobile locations.

The offer is slightly different depending on where you decide to get this iPhone 7.

At WOW Mobile locations, they are offering the iPhone 7 32GB with a $200 prepaid credit card for new activations, plus a $50 credit for a trade-in.

At London Drugs locations, instead of $200 prepaid credit card, a store gift card of equivalent value is being offered.

The $35 activation fee with Koodo is required and cannot be waived as part of this promo, which is also available at other resellers, such as Best Buy and The Mobile Shop.

Koodo recently raised the minimum monthly price of their Tab Medium plans to $50 per month, with 4GB of data and 500 Canada-wide anytime minutes.

If you’re looking to get a smartphone for your kids, it works out to $110 for the iPhone 7 (+$35 activation fee), after the gift card and trade-in offer, which is pretty decent for a new iPhone.

Koodo is directly offering a “$100 bonus gift” if you buy the iPhone 7 from them online, but their upfront pricing is $100 and not $0 like retailers.