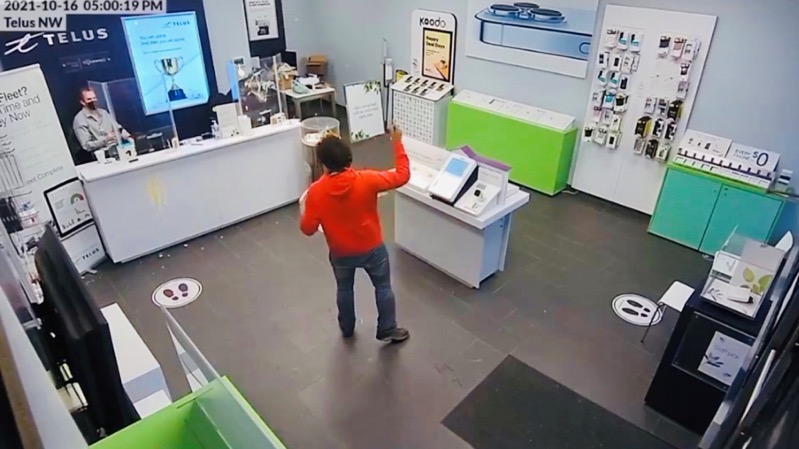 Quinsam Communications is a Telus dealer located in Campbell River on Vancouver Island in British Columbia, and was recently subjected to an egging incident inside the store.

According to CTV News Vancouver Island, a man armed with a carton of eggs started throwing them inside the store, pelting the front desk area. The incident happened on Saturday evening around 5pm.

“I’ve been in the wireless industry for about 10 years now and this is probably one of the weirdest things that has happened,” says Cody Spetifore, a sales rep for Quinsam, speaking to CTV News Vancouver Island.

“You’re going to have disgruntled customers but I have never had someone throw eggs at me before,” added Spetifore.

Security footage recorded the man egging the store, while employees can be seen left stunned and scrambling behind plexiglass, as tensions boiled over regarding the man’s displeasure with Telus and its 5G airwaves.

“This has got nothing to do with you, boys,” said the man, before he started throwing eggs. Employees were behind plexiglass as eggs were being thrown. The man told employees he believed Telus 5G was accessing his devices.

“I’m gonna tell you right now…stay out of my f**king network” says the man’s profanity-laced tirade, also captured by an employee’s smartphone camera. The man threw eggs both inside and outside the store.

Quinsam Communications closed on Monday to clean up the eggy mess. Campbell River RCMP responded to the incident, said Spetifore, and are investigating. Spetifore said he wants to get in touch with the man and see if he requires help.

Some online conspiracy theories believe 5G airwaves are dangerous; some others believe COVID-19 vaccines can also improve your cell signals when chips apparently get implanted into your arm.

Back in 2020, we read about people in Quebec setting fire to 5G cell towers, with some reportedly believe the technology was linked to COVID-19.

Staples Canada and Bell announced a multi-year exclusive agreement on Tuesday, to sell Bell, Virgin Plus and Lucky Mobile wireless and wireline services at Staples stores across Canada for both consumers and small businesses. Both companies will also partner to sell Bell services to medium businesses through the Staples Professional sales team. Beginning in late […]
Gary Ng
7 hours ago