Last week we heard of a Vancouver doctor lose his smartphone in the U.S., then received a surprise $24,000 data bill, when he failed to report his device missing for two weeks.

Now, we have another story of a Telus customer, Kenneth Hart, who received a $2,816.63 data roaming bill, after using 600 MB of data while in the U.S. 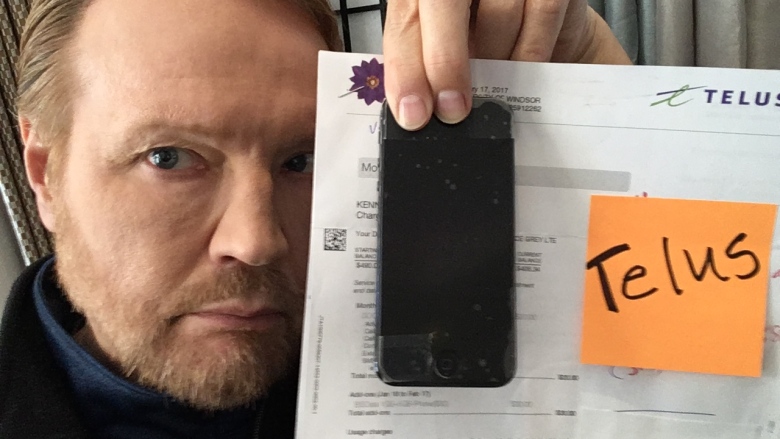 A University of Windsor psychology professor, Hart contacted CBC News to help fight his $2,800 bill, which he said was unfair, because he did not approve the roaming charges, while in New England during January.

“I felt unfairly treated and I dug my heels in,” he said. “I was caught by surprise,” Hart explains, saying “I’m racking my brain as to where did the data usage come from?”

While in the U.S. during the Christmas holidays for three days, Hart said he did use roaming data, but he claimed his usage was light, to avoid expensive charges.

He says he never received a text message from Telus asking him to approve extra data charges—but he did get messages his roaming data charges were increasing. Since he didn’t approve any overages, he ignored the messages, suspecting they were bogus or errors on Telus’ part.

“I ignored all of them and I said, ‘This has got to be a mistake,’” he told CBC News.

Hart then contacted Telus asking about the high data bill, with a customer rep taking it down by half to $1,400, but he was unsatisfied, saying “I was insulted by that guy when he gave me a 50 per cent offer. I said, ‘I’m not paying a penny and I’m getting legal advice and I am going to fight this.'”

At that point, the Telus agent removed the 50 per cent offer. From here, Hart looked into hiring a lawyer to fight back, willing to spend money to do so, saying “I’m so angry that I’m willing to spend $1,500 and try and get it down to zero.”

After taking his case to CBC News, Telus dropped all the charges. The carrier retroactively added a U.S. roaming package to Hart’s plan, eliminating the bill entirely (he was credited $2747.88), two hours before responding to CBC News.

Telus spokeswoman Luiza Staniec told CBC News, “When a customer has a concern, we try to work with them positively, often to get them onto a plan that better meets their needs.”

The company explained Hart’s wireless account was a corporate account from the University of Windsor setup with “notify only” for extra charges. This means the CRTC Wireless Code cap of $100 roaming charges and text approvals did not apply to him.

The professor said “I have no memory of that,” when asked about his “notify only” account. The CRTC told CBC News individuals can bypass the data roaming charge cap, only if they “knowingly and expressly” opt out.

Hart only had to end up paying $68.75, happily telling CBC News “I feel wonderful,” adding “I’m very happy that I was my own consumer advocate and reached out to you, and that you went to bat for me.”

What do you think? Was the customer or Telus right in this situation?