According to text messages sent to some Public Mobile customers today, the following Koodo switcher plan was offered to those on the company’s 3GB of 3G data over 90 days for $90 (1GB for $30/month essentially).

Here’s what it said:

“Public Mobile here with an exciting offer for ________. Switch to a monthly plan with our sister-brand, Koodo, and receive $100 in bill credits, 1GB of LTE data, unlimited Canada-wide minutes and unlimited international text for only $30 per month. Plus you may be eligible for a $0 phone with the Koodo Tab! Redeem online at http://koo.do/choosekoodo and input promo code GOKOODO301GB100. Your validation code is your phone number. Offer ends May 13, 2018. You’re included on the list for Public Mobile offers and deals. To be excluded, reply unsubscribe. Conditions apply.” 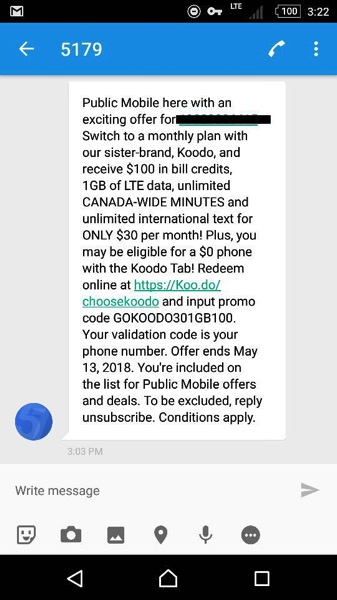 The Koodo offer includes LTE data instead of 3G and also offers unlimited Canada-wide minutes, instead of unlimited province-wide talk.

According to iPhone in Canada reader @tristannorman, his co-worker was sent this offer, but won’t be switching due to the latter’s Public Mobile referrals, which have reduced his monthly price.

We’ve seen the company send out various offers to its users on their coveted $120/12GB plan over 90 days, in an effort to move them over to postpaid plans with Koodo.