Public Mobile SIM Cards Hit Craigslist for Up to $50 Each

So many people have flocked to the plan—which expires tonight—it caused Virgin Mobile and Fido to launch matching plans to retain customers (check out these line ups outside Fido stores in Metro Vancouver). 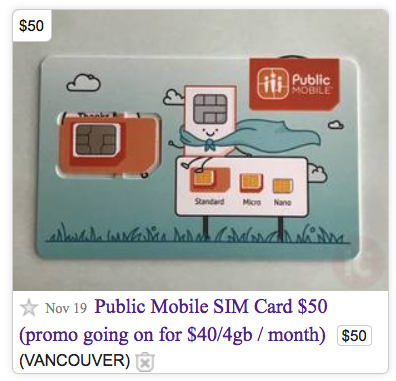 Flattered our photo was used #watermarksftw

What makes Public Mobile different is customer service is online-only through Community forums and social media, while customers also have extensive self-serve options. As for SIM card sales, those are only available online too (and were free earlier this year).

This Friday and Saturday, Public Mobile launched SIM card sales in Toronto, Montreal and Vancouver, with proceeds going towards charity Movember. But it appears Vancouver only had 250 SIM cards available each day, selling out hours after launch.

The shortfall has resulted in resellers on Craigslist capitalizing on demand, selling cards for as high as $50 (and some demanding a referral as well), but most are averaging $35-$40. Don’t pay $50–negotiate with sellers as they surely will throw out a lower price, so this is the time to low-ball away.

Anyways, with the Public Mobile promo expiring tonight, these resellers don’t have much to lose if nobody purchases their cards. However, it appears people are willing to pay the asking price for these cards, as switching to Public Mobile will most likely result in even greater cellphone plan savings long term.