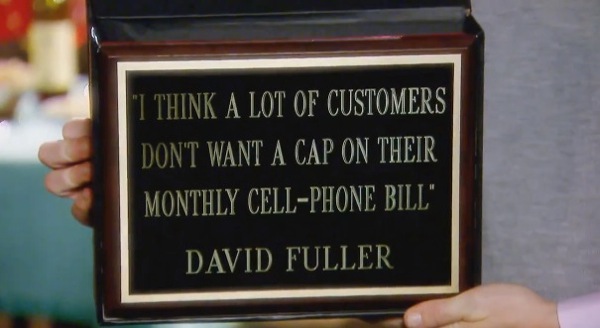 Last night on the Rick Mercer Report, there was a funny skit where Mercer mocked TELUS Chief Marketing Officer David Fuller, for his comments at a recent CRTC hearing regarding wireless contracts and fees (via the CBC). The video was uploaded to the RMR YouTube channel early this morning:

“If they want a service that’s capped… that’s what a prepaid service can provide.”

In the RMR skit, Mercer presents the following commemorative plaque for sale that reads:

To put these comments into context, Fuller said when it comes to data and roaming a monthly cap would be unnecessary if carriers were already providing push notifications and online usage monitoring. CRTC commissioner Candice Molnar disagreed and responded “not all customers want to spend their time sorting out how much data they have left, particularly in something like a family plan.”

Fuller responded letting customers choose specific cap amounts on their accounts would be too complex and “very expensive” for wireless carriers to implement, so therefore caps of $150 or $200 would be more reasonable, compared to lower amounts, where he noted “we firmly believe $50 is far too low.”

To be fair to Fuller, senior vice president of regulatory for Rogers, Ken Engelhart, also mentioned a similar stance at the same CRTC hearing, noting the company would rather have opt-in versions of a monthly cap.

The Canadian Radio-television and Telecommunications Commission (CRTC) today announced it has rejected Telus's request to charge customers a 1.5% processing fee on payments made by credit card. "We heard Canadians loud and clear: close to 4,000 of you told us that you should not be subjected to an additional fee based on the method you...
Nehal Malik
1 hour ago