Late last week TELUS pushed out a 14.1 carrier update for the iPhone, a jump from the previous 14.0 update. Users can access this update by going to Settings > General > About, where a pop-up prompt will ask you to update carrier settings, as seen below: 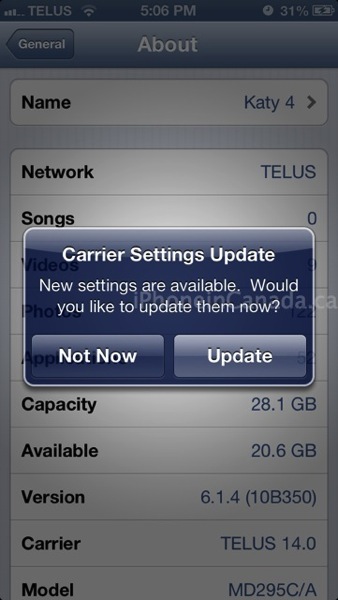 Carrier updates are periodically pushed out to users to optimize connections to cellular networks. We have reached out to TELUS for details on what this minor update covers and will update this post when we hear back from them.

In the meantime, if you are suffering from cellular connectivity issues, a carrier update could most likely help, but in the past with other rival carrier updates data speeds can also be affected negatively.

If you have installed this update on your iPhone, let us know if you spot any changes in data speeds or signals. Check back to this post soon for updates.

Update: Looks like Bell has pushed a carrier update today as well: