In a recent blog entry, TELUS has revealed its revenue during Q1 of 2012 as $2.6 billion which is an increase of 4% over last year. Thanks to company’s solid data growth, a six per cent growth in wireless revenue and two per cent growth in wireline revenue has been observed. TELUS also added 63,000 postpaid wireless customers in the first quarter reporting an industry leading wireless average revenue per unit (ARPU) and subscriber churn metrics. In the wireline segment, TELUS added 44,000 TV customers bringing its total subscriber base to just over 550,000 which is up 54% from 2011. 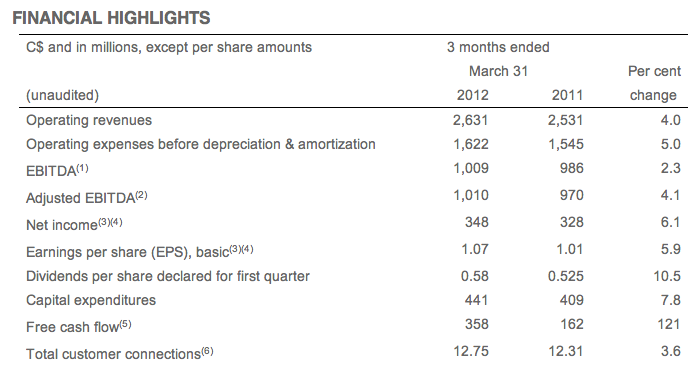 Consolidated first quarter earnings before interest, taxes, depreciation and amortization (EBITDA) was up more than two per cent from a year ago and for the first time, surpassed $1.0 billion. Adjusted EBITDA (excluding items detailed in footnote 2) was up more than 4 per cent.

Net income and earnings per share (EPS) for the first quarter were $348 million and $1.07, respectively, representing year-over-year growth of approximately six per cent each.

Free cash flow more than doubled to $358 million this quarter – up by $196 million over the same period a year ago. This was due primarily to lower discretionary contributions made to defined benefit pension plans, lower restructuring payments and higher adjusted EBITDA.

TELUS was named the most outstanding philanthropic corporation globally for 2010 by the Association of Fundraising Professionals, becoming the first Canadian company to receive this prestigious international recognition.