TELUS launched their Device Price Match Promise nearly two years ago and just ahead of its second anniversary, the company is set to axe the smartphone price matching program.

At the time, the company explained “Visit a TELUS store with a competitor’s ad showing a lower price. We’ll accept printed ads, email flyers, photos of in-store or out of home advertising or printed screenshots of competitors’ websites.” 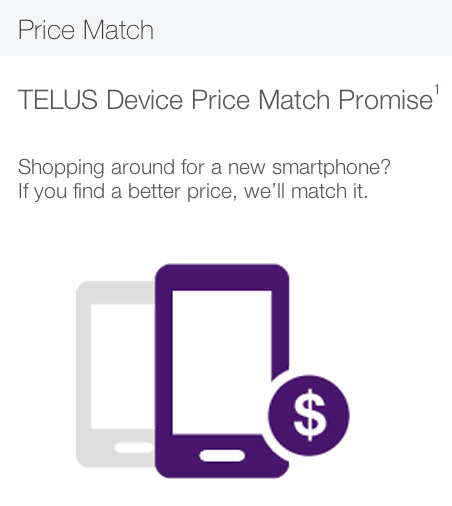 However, according to an internal memo to employees (via MobileSyrup), the program is set to end on November 2, 2015.

As for reasons the program is being discontinued, TELUS explained the decision “aligns with the price match policies offered by our competitors, and it is expected to significantly improve our credit reduction initiatives.” In other words, TELUS wants to copy Rogers, which ended their own price matching program at the beginning of this year.

Most of the time, prices for popular handsets remained the same across the Big 3, aside from various promos during the year, so price matching didn’t really save that much anyways, but mainly kept customers from needing to switch carriers to save a few bucks.

Yesterday we told you about how Rogers is increasing the price of legacy unlimited Infinite wireless plans, and now it appears Telus is doing the same. According to iPhone in Canada reader Michael, Telus recently emailed him about “upcoming changes to your mobility account,” then detailing how two lines on his account were set to increase […]
Gary Ng
23 hours ago