Telus has announced today it has partnered up with Play Taxi Media to unveil a new fleet of 1,000 vehicles equipped with power stations to charge your cellphone or tablet while you’re on the go, starting in Toronto, Montreal, Calgary and Vancouver.

“It’s Murphy’s Law that your device battery will die right when you seem to need it the most,” says Anne-Marie Laberge, Vice President of Brand and Marketing Communications at TELUS. “We’ve all been there – running late for a dinner date with friends or in between meetings when your phone dies before an important conference call. Our in-taxi chargers are just one way that we’re working to put customers first – they offer a simple convenience that will go a long way in making their lives easier and more connected.”

Charging stations will be built into the backside of passenger seat headrests to allow you to charge any device in the dock, which is said to work with “any phone or tablet”. Stickers on windows will remind customers to remember to grab their phones as they leave.

Telus says taxi riders can find these new cabs with charging stations in Blacktop & Checker Cabs in Vancouver, Mayfair Taxi in Calgary, Ambassador Taxis in Toronto and Taxi Union in Montreal through 2015, with more taxi companies coming on board in the upcoming months.

Let us know if you get to experience these new device-charging taxis!

Update: Telus has sent images of what the charging stations look like via email; note the multiple cables to support your iOS device and others: 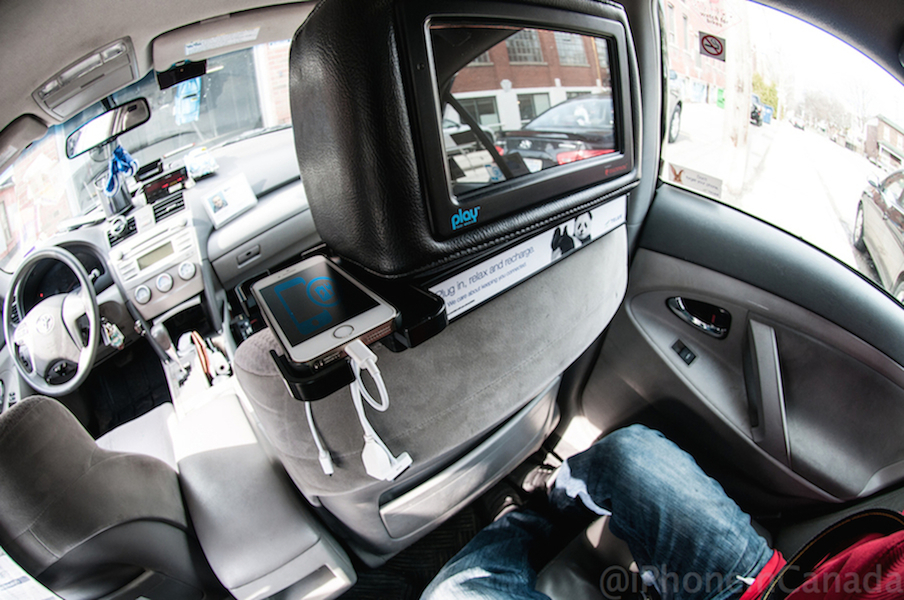