Telus has increased the price of some of its legacy prepaid plans, particularly its pay-per-use ‘Exclusive 10’ plan, bumping it up from $10 to $13.

An iPhone in Canada reader was notified of the change yesterday via text message, which said the plan would auto renew at $13, a 30% increase compared to before. 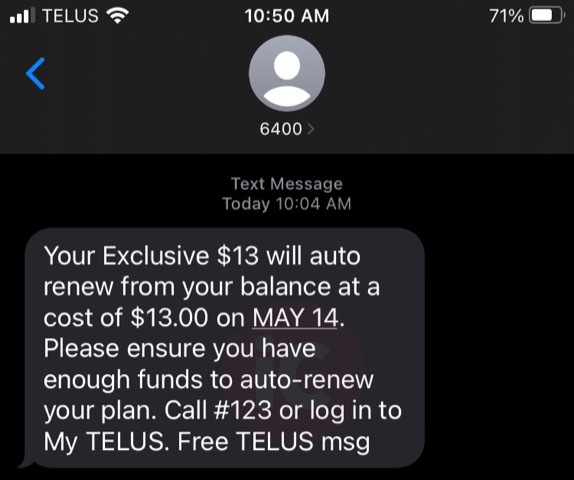 Telus normally sends an automatic text message monthly reminding when payments are set to auto-renew, but this latest indicated the price change. The plan used by this reader was for voice calls and a handful of SMS messages, allowing for a cellphone plan that’s low cost and rarely used.

Back in 2018, Telus changed its prepaid pay-per-use minimums to $10 per month for all subscribers. Previous to this change, some prepaid customers were able to subscribe to $5 per month plans for messages only and $0.15 per minute voice calls.

While the price increase may seem minimal, for low-income seniors such as this iPhone in Canada reader, every dollar counts.

We’ve reached out to Telus for comment on the price increase for this legacy plan and will update accordingly.