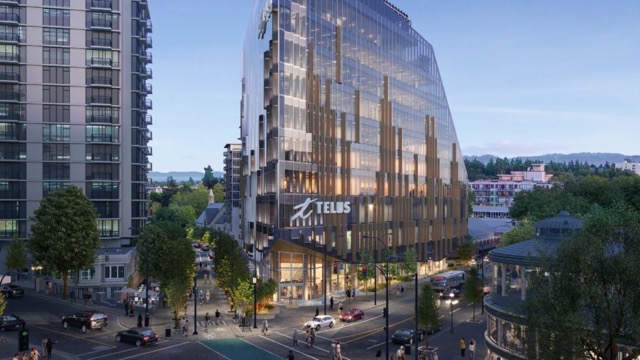 However, the project, known as Telus Ocean, now faces a different kind of obstacle. According to the CBC News, a biologist has questioned how Telus’s new all-glass HQ building will affect birds.

Willow English, an avian biologist who works with the bird collision prevention organization Safe Wings, is concerned for the bird population in Victoria if the 11-storey building goes up at Douglas Street and Humboldt Street the way it is currently designed.

“The first thing that caught my eye was the glass, just all glass, and it looked very reflective,” she said.

Birds are susceptible to mistaking transparent glass for clear space which they can fly through, but in actuality end up colliding with. Reflective glass is no good either since birds often mistake reflected trees and vegetation for a safe place to land and end up hitting the window.

According to English, human activity directly causes the deaths of hundreds of millions of birds each year, and bird populations across Canada are currently down by about 30%.

“One of the major reasons for this is thought to be collisions with glass,” said the biologist.

While bird-friendly building design guidelines have been established in other cities, including in nearby Vancouver, developers in Victoria aren’t subject to any.

The Telus Ocean project was originally announced in June 2020, but plans had to be altered after the originals were shot down at the public hearing stage.

Aryze, the development company Telus has contracted for the project, says the building is intended to be the new business and innovation hub for B.C.’s capital.

English said she has asked the developer for more information about the design and what measures have been taken to minimize risk to birds, but she has so far been given very few details.

Development lead Chris Quigley said bird safety was factored into the design of Telus Ocean from the beginning, and the plans actively mitigate risk to the local bird population.

Quigley said there’s significantly less glazing (or glass surfacing) than appears in the renderings. He said the building is about 40% glazing, which, according to him, is low compared to other modern buildings in cities like Toronto and Vancouver.

Furthermore, Quigley said Telus Ocean will feature fritted glass — glass that has a pattern on it — to help prevent birds from mistaking the building’s glass facade for open air.

“From a glazing perspective, there’s been a lot of things done in terms of how it’s designed and the type of glazing being proposed,” said Quigley.

The developer added that the site is currently being prepared for construction, which is expected to start sometime in the next couple of months.

Telus prepaid brand Public Mobile has announced its holiday freebies are back for 2022, offering free data, long distance and more. “During this season of giving, we’re bringing back our Holiday Rewards and we’ve got some amazing things to give!”, said Public Mobile on Thursday. Public Mobile is offering up the following freebies for 2022 […]
Gary Ng
12 hours ago

Telus-owned prepaid brand, Public Mobile, has extended its Black Friday 2022 deal that offered a $35/20GB plan for Cyber Monday. When new customers activate online and use promo code 20OFFMONTHLY, they can get the company’s $55 plan with 20GB with a $20/month credit for 15 months, taking the plan down to $35/20GB with 4G speeds, […]
IIC Deals
3 days ago