The report, which collected data from nearly 174,000 devices between the period of April 1 to June 29, 2019, resulted in over 438 million total measurements.

According to OpenSignal, some significant milestones were achieved by Canada’s wireless carriers, in particular, Telus and Bell, as both companies were the first to the 50 Mbps barrier when it came to the Download Speed Experience test. 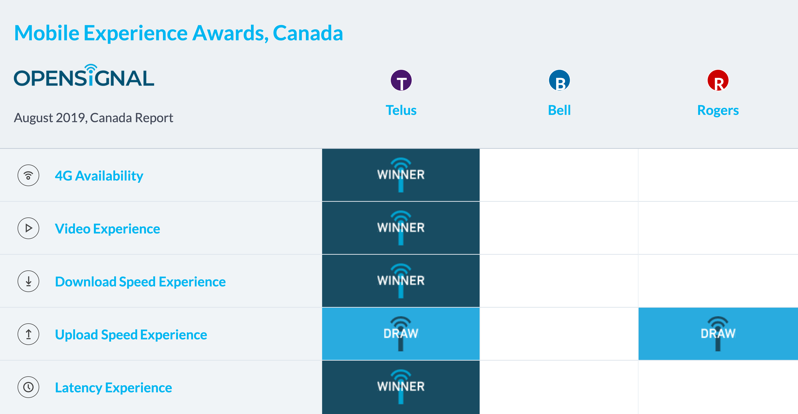 Telus measured in at 57 Mbps, followed by Bell at 51.9 Mbps and Rogers at 41.7 Mbps. In every Canadian city analyzed by OpenSignal, the average overall download speeds were “in excess” of 70 Mbps.

As for Telus, the carrier was the first Canadian operator to reach 90% 4G availability, with Bell at 89% and Rogers at 88%, respectively.

OpenSignal declared Telus “as the operator to beat in our metrics”, saying:

In this report, Telus won four of our five awards outright and tied for the fifth, improving on the already dominant position it established last year. Telus added Video Experience to its list of wins after drawing with Bell in that category in our last report. That’s not to say the other operators aren’t improving. Telus, however, has managed to either stay ahead of or outpace its competitors in nearly every metric in our analysis.

Does your wireless experience with the Big 3 agree with OpenSignal’s conclusions?