TELUS has announced the Optik on the Go iOS app has been updated to version 2.0, which now allows Optik TV subscribers to watch Movies on Demand rentals on the go, from the library of over 1,500 movies and TV shows.

The app update for both the iPhone and iPad brings improved video quality, more HD titles, the ability to watch trailers before renting and also viewing over mobile networks. Users can start a Movie on Demand rental from one device and continue it at home, or vice versa.

“Our customers have asked for more choice and flexibility from their TV service and we are pleased to answer the call,” said David Fuller, TELUS Chief Marketing Officer. “We want our customers to enjoy Optik on the go, to watch what they want, whenever and wherever they want. With better performance, more HD and the ability to rent new releases from our ever growing library of movies, we are committed to giving users of Optik on the go more content, flexibility and choice.” 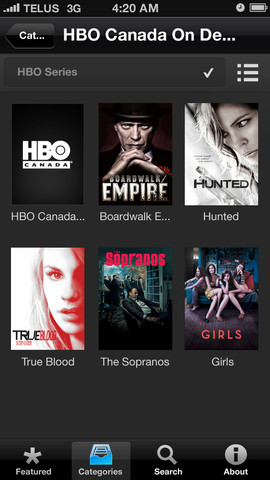 TELUS Optik on the Go was launched last February.

Download links: TELUS Optik on the Go for iPhone, iPad.