With the Federal Government set to launch its rules for the 700MHz wireless spectrum auctions, TELUS Senior Vice President of Federal Government and Regulatory Affairs, Ted Woodhead explains the company eagerly is anticipating these rules so it can continue to expand their wireless network.

Essentially, TELUS notes even with their smaller spectrum holdings the company has been able to keep up with rival carriers Rogers and Bell through its “acquisitions and good business execution,” making the carrier a national competitor: 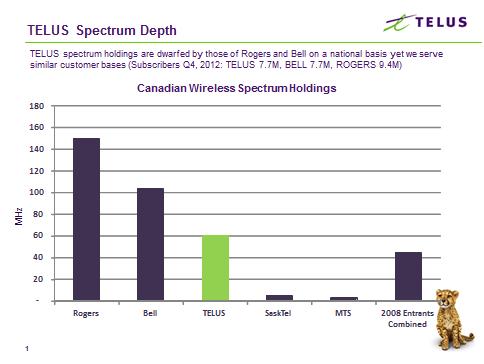 The chart reads “TELUS spectrum holdings are dwarfed by those of Rogers and Bell on a national basis yet we serve similar customer bases.” As of Q4 2012, TELUS has 7.7 million subscribers, similar to Bell and behind Rogers, which leads at 9.4 million.

Torontonians and experts are once again calling for Rogers, Bell, and Telus to provide underground cellular service on the Toronto Transit Commission (TTC) subway amid an uptick in violent incidents, including stabbings, armed robberies, and assaults, on the line in recent months — reports CityNews Toronto. In 2012, BAI Communications won a 20-year, $25 million...
Nehal Malik
2 hours ago

One of Canada’s largest telecoms has confirmed it has acquired independent internet service providers (ISPs) Altima Telecom and London, Ontario-based Start.ca. Both companies are resellers of internet and cable services. Peter Novak, Vice-President of Insight & Engagement at TekSavvy, said on Friday morning, “Got it confirmed: http://Start.ca, another indie ISP, has been quietly acquired by […]
Gary Ng
23 hours ago