TELUS has asked the City of Vancouver for permission to erect a retractible 7.5 metre by 11 metre “media sign” outside its new TELUS Garden building in downtown Vancouver between the 16th and 18th floors. The proposed sign would be located on 520 West Georgia, facing Seymour Street, according to the Georgia Straight. 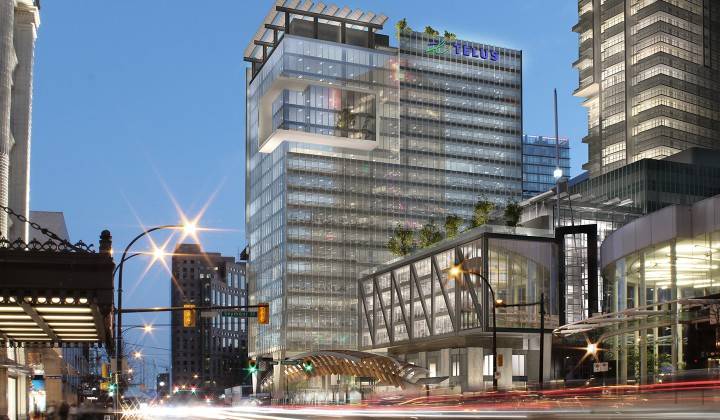 Development manager Rihannon Mabberly from Westbank told the publication the sign would seen “mostly from the pedestrian realm” and noted it would not carry advertising, but rather showcase local artists (professional, emerging, school groups) on the big screen, saying “I would love it if festivals made use of it.”

The sign would use backlight-projection technology which only works in low-light conditions, and images would be shown from dusk until 11PM. Mabberly says other big cities such as San Francisco and Montreal already have buildings with backlit signs.

“We get criticized a lot in Vancouver for being a city of glass,” says Mabberly, continuing with “It’s a great way of animating that glass façade.”

When TELUS Garden opens in a couple of weeks, the ground floor of the new building will be open to the public.

What do you think of this proposal to display art on the outside of the building?