TELUS is increasing texting rates to the US made from Canada as of May 1st. The rate will increase to $0.40 per message sent, as noted on their website:

As of May 1st, the rate for text messages sent from Canada to international locations (now including Canada to US) will be increasing to $0.40/message.

Text messages sent from Canada to the US will no longer be included as part of the domestic text messages in your plan/add-on. 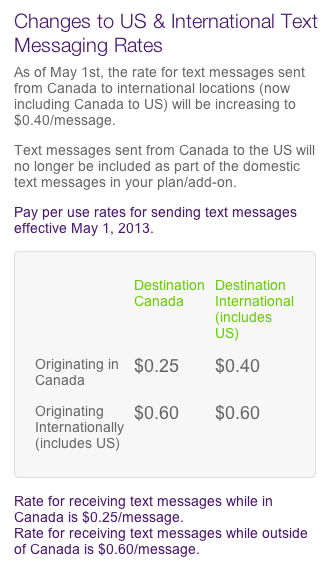 The last line seems to have caused some frustration for customers, as noted in a story from the CBC:

Kim Smith said she chose to sign up with Telus a year and a half ago because they offered a cell phone plan with unlimited texting to the U.S. and within Canada.

Smith said she has four children and one of them lives in Kansas.

“The easiest way to get a hold of, especially our son in the States, is to send him a text,” she said.

But starting May 1, Telus is changing its plans that include unlimited texting by adding an additional 40 cent fee for text messages sent to the U.S.

In response, TELUS spokesman Shawn Hall told the CBC the changes have been made because international texting is more expensive to the company:

“This helps us avoid the risk of having to increase domestic rates to subsidize international texting, which is more expensive for us to provide,”

Users can subscribe to monthly international text packages for $5 (100 messages) or $10 (unlimited) as alternatives to paying $0.40/text. Rates for Rogers and Bell customers to text US and international destinations is $0.35/message.