We have seen initiatives for disguised cell towers (Bell), and we’ve also experienced the demand for more decision-making power for communities when it comes to deciding where the telecommunications towers are located. Wireless services have grown to become a big part in our everyday lives, and so has the demand for new towers.

In a strong push for more choices, lower prices, and better services in the wireless sector, the government announced today that it will give more decisive power to communities over how and where new cell towers are built. Today, Industry Minister James Moore announced the government’s new cell tower sitting policy under which companies are required to:

– consult communities on all commercial tower installations, regardless of height;
– build the tower within three years of consulting with communities; and
– ensure that residents are well-informed of upcoming consultations.

“The placement of new cell towers is often a divisive issue in communities across Canada. It is essential that residents be at the centre of the process to determine the location of a new tower, and it is up to the wireless industry to ensure that local voices are heard. These new rules will give communities a better say in the placement of new cell towers,” said Industry Minister James Moore.

Also, the government encourages telcos to look at tower sharing opportunities before starting to build their own in order to reduce the number of towers needed in each community.

When asked about how he feels about the 700MHz auction, the Industry Minister said that he is satisfied with its success and will post an update in the near future. 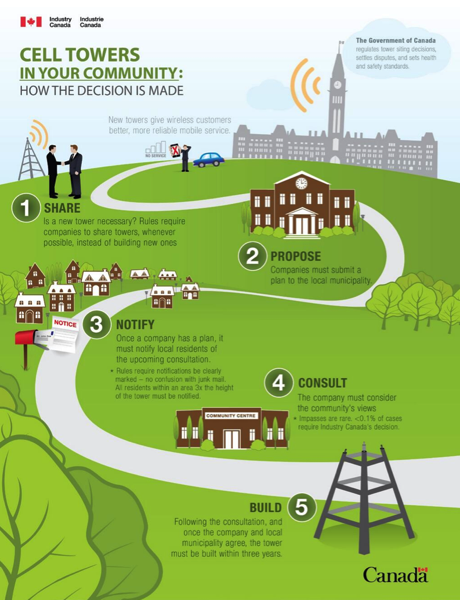