TNW Wireless Launches Service in Northern BC and Yukon

In line with its December promise, Investel has announced today that it has restored the former RuralCom’s cellular sites and has built an additional site, deploying its wireless service currently covering part of the northern West Coast and Fort Nelson, BC, as well as most of the Whitehorse, Yukon area, as well as two of the seven communities in the Haida Gwaii, including Port Clemens, where no other wireless service previously existed. 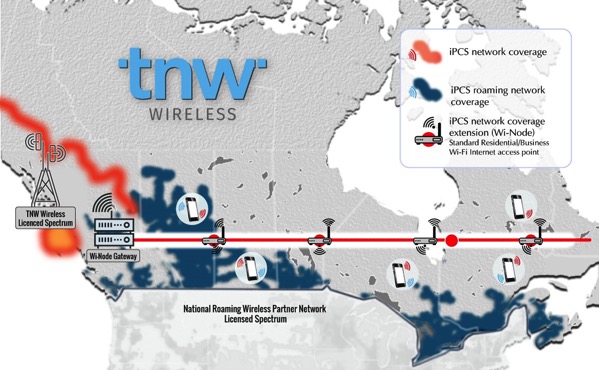 “We are very proud of this significant company milestone and are confident that TNW Wireless will be an exceedingly welcome service, particularly in the regions where no service was previously available”, stated Lawry Trevor-Deutsch. “We look forward to expanding the TNW Wireless service to other underserved regions within our spectrum licensed area and throughout Canada with iPCS in full support of the Government of Canada’s declaration of connectivity as a fundamental right, a policy which we believe will benefit all Canadians.”

Investel completed the acquisition of RuralCom Corp. in December and changed the company name to TNW Wireless, so if you are looking for this particular wireless service provider, hit up this link.

TNW Wireless is also preparing to provide coverage along 1,700 kilometres of the Alaska Highway from Northern BC to the Alaskan border in the Yukon, and full coverage to all seven Haida Gwaii communities.

TNW Wireless has ambitious plans: it will be deploying its proprietary iPCS smartphone-over-IP technology across North America with extended Home Public Mobile Network coverage using its Wi-Node technology. During this spring, TNW Wireless will also be busy inking deals with carriers across Canada and the US to enable roaming on their wireless network. The Wi-Node gateway technology enables subscribers to use the 850 MHz spectrum – TNW Wireless licences – remotely through a Wi-Fi connection.

The carrier operates its own 3G core network but is promising to work with its 4G LTE EPC network both located within its Home Public Mobile network.

Torontonians and experts are once again calling for Rogers, Bell, and Telus to provide underground cellular service on the Toronto Transit Commission (TTC) subway amid an uptick in violent incidents, including stabbings, armed robberies, and assaults, on the line in recent months — reports CityNews Toronto. In 2012, BAI Communications won a 20-year, $25 million...
Nehal Malik
22 hours ago