U.S. wireless carriers have put into place various text message warnings to prevent customers from being hit with ‘bill shock’ when they used up their data plans or are roaming internationally. The companies agreed to implement the service back in 2011 and integrated the alerts just prior to a Wednesday deadline.

Below are a couple examples of how some carriers will implement their warning systems:

Below is a chart of carriers and their specific alerts, data supplied by the industry trade group CTIA-The Wireless Association: 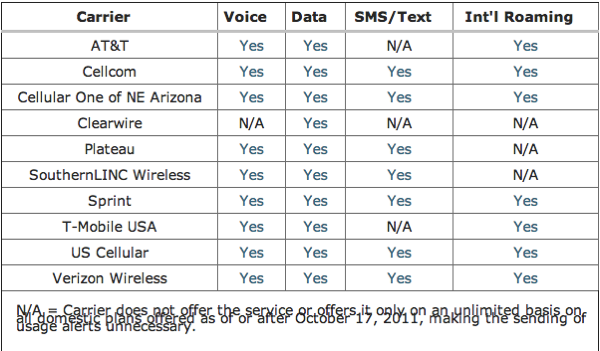 Carriers in Canada have similar alerts for those roaming internationally, but each policy varies by company. Even with these alerts in place, stories of ‘bill shock’ continue to surface in the media.

In a previous CBC report on the dad whose son racked up a $22,000 data roaming bill on Fido, he received a warning text and then data access was cut off after three days (and 700MB of data usage). TELUS cuts customers off when their bills reach $200.

The CRTC’s wireless code of conduct proposed capping data fees at $50; however, carriers opposed this idea as they noted mandated data caps would be difficult to implement, but not impossible.

What do you think is the best way to prevent cases of ‘bill shock’? Data caps while travelling? Educating consumers?