Videotron Promo: 2 for 1 iPhone X with 2-Year Contracts [u]

Is this the first time we’ve seen a ‘2 for 1 offer’ on Apple’s latest iPhone? Quebec carrier Videotron has launched a promo offering 2 for 1 iPhone X, if two 24-month contracts are signed:

For a limited time, get two identical-capacity iPhone X devices for the price of one with two 24-month agreements. 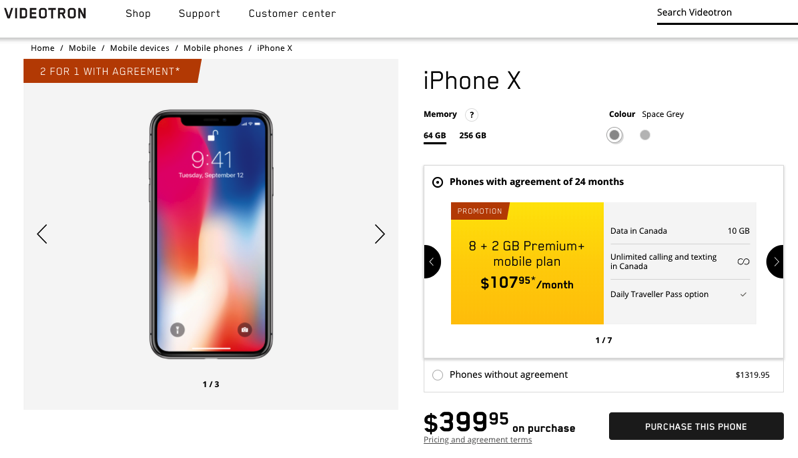 Pricing starts at $67.95 per month on a 4GB plan with unlimited calling and texting in Canada for a 64GB iPhone X.

The 2 for 1 offer is not just limited to iPhone X, as it applies to iPhone 7 models and newer.

Update: According to page 2 of the fine print, this deal is only available if both subscribers are paying a minimum of $107.95 per month. This post has been updated accordingly.

For those thinking about signing up outside Quebec, nice try, because Videotron requires 50% of your usage to be in Quebec.

If you’re seeking out an iPhone X, the 2 for 1 offer is enticing since the latter is an expensive phone. Let us know if you’re going to jump on this.

The Canadian Radio-television and Telecommunications Commission, the country’s broadcasting and telecommunications regulator, announced on Monday morning its website and phone lines are down for the count, in what appears to be an unscheduled outage. “Please note that our website, its related applications and phone lines are temporarily unavailable, we will update you as soon as […]
Gary Ng
12 hours ago