J.D. Power has released their 2018 Canada Wireless Customer Care Study today, and Bell’s Virgin Mobile has repeated as the top ranked wireless carrier when it comes to overall customer satisfaction.

According to the study, it noted customers who deal with a customer care team that makes it hard to solve problems results in perception companies only care about the bottom line, as well as being unreliable and offering poor value.

The data noted 32% of customers say it took “a lot of effort” to resolve a wireless problem, while 41% of those who ran into issues are considering or made a move to switch to another carrier.

“Without a doubt, a seamless customer care experience can positively affect a consumer’s view of their wireless provider and appetite to remain a loyal customer,” said Adrian Chung, Director of the Technology, Media & Telecom Practice at J.D. Power in Canada, in a statement issued to iPhone in Canada. “It is no secret that retaining customers is more cost-effective than acquiring new ones. Therefore, Canadian carriers should put a greater emphasis on streamlining the customer care experience and making it as effortless as possible. They should also be extra conscious about utilizing the appropriate contact channels.”

In the past six months, 62% of customers used their phone as their method of contact to with their wireless provider to resolve an issue, but social media use is gaining in popularity for younger customers, particular Generation Z, compared to baby boomers. Those who search social media for answers usually resolved their issues faster, says J.D. Power.

As for ranking of wireless carriers, Virgin Mobile scored the highest for the second straight year, earning a score of 793 out of a 1000 point scale, followed closely by Koodo Mobile and SaskTel, which tied in second with a score of 792. Videotron was in third at 789, while the overall satisfaction average was at 753. 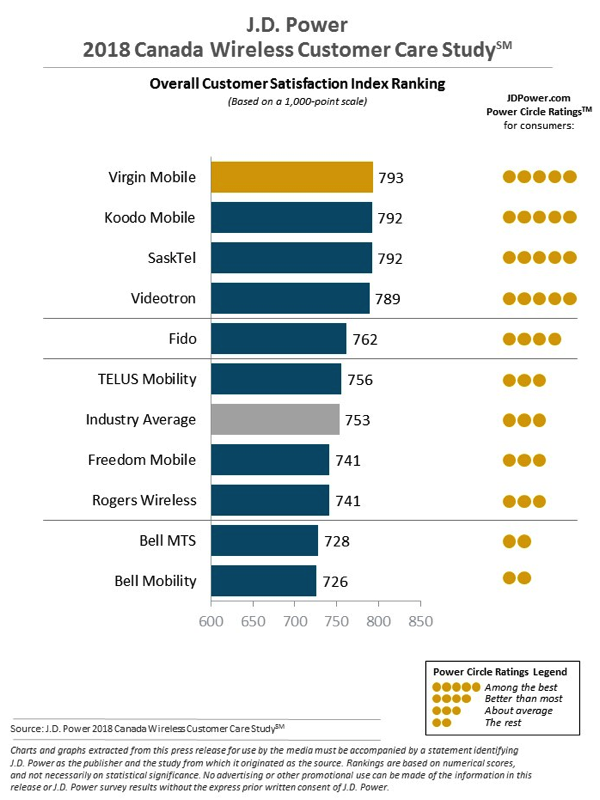 The J.D. Power study took place online from February to March 2018 from a survey of over 5,000 Canadian wireless customers with a postpaid plan, and who had contacted customer care in the past six months.

Which wireless carrier do you think has the best customer service?