The study also revealed customer traffic to wireless carrier stores dropped to 51%, down 5% from 2019, which J.D. Power says “casts a shadow over future in-store purchases in the COVID-19 era.”

“The role of retail stores will remain critical for carriers in retaining customers, attracting new ones and building their brand,” said Adrian Chung, director of the technology, media & telecom practice at J.D. Power Canada, in an issued statement to iPhone in Canada. “With fewer shoppers visiting carriers’ brick-and-mortar locations, the prospect of a redesigned shopping experience in a new retail environment will offer opportunities to sharply focus on meeting customer needs and elevating their purchase experience while continuing to adhere to public health guidelines.”

The study found Bell’s Virgin Mobile ranked as the highest in overall satisfaction when it comes to purchase experience with 820 points out of a 1,000 point scale, followed by Telus-owned Koodo Mobile in second (816) and Quebec’s Videotron (802) in third, rounding out the top three. 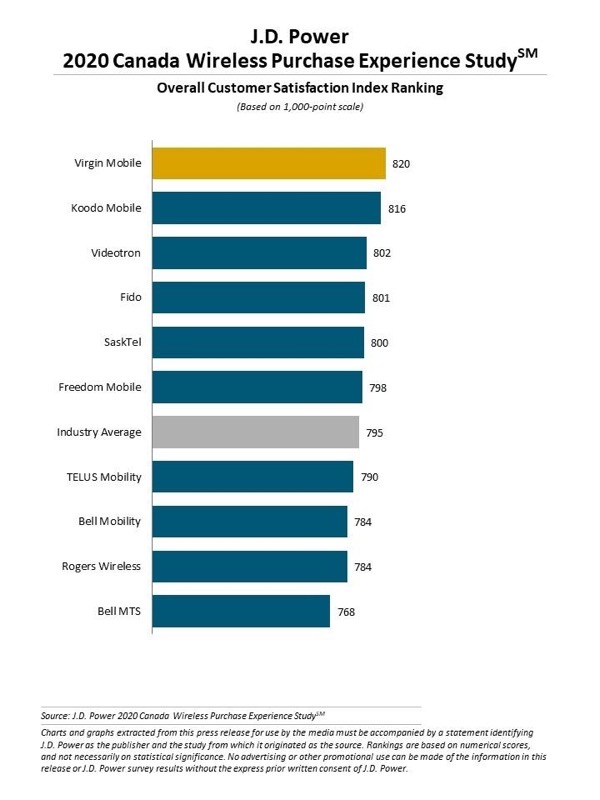 Rogers-owned Fido (801) was in fourth, SaskTel (800) in fifth and Freedom Mobile (798) in sixth, rounding out the top six which ranked above the industry average score of 795.

The 2020 study found overall satisfaction at 795, increasing by two points compared to 2019.

J.D. Power says its study was based on 5,249 responses fielded from February to March 2020, from wireless customers with a postpaid plan and had made a wireless purchase in the past six months.