Will Canadian Carriers Ever Support SMS Chat in Gmail? 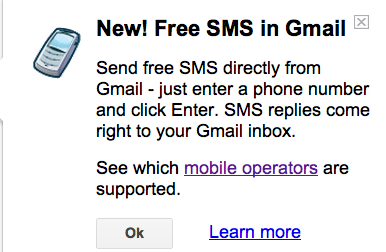 Google has long had a touted feature called SMS Chat in Gmail, but Canadian carriers have been absent. According to Google, it is up to carriers to contact them if they want to be included in this feature:

Below is a list of supported mobile operators for SMS Chat in Gmail.

If you are a mobile phone company, and wish to integrate with the SMS feature of Gmail, please drop us a note at: mobile-operators-gmail-sms-integration@google.com. Please note that this is for mobile phone companies only and we will not respond to individual requests.

As you can see below in the list of countries that support SMS Chat in Gmail, Canada is not listed, but countries such as Cambodia and Cameroon are: 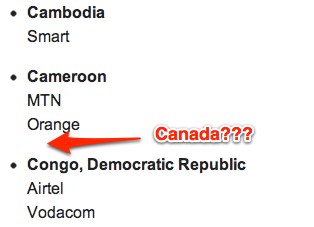 For iOS users, it’s simple for us to message iPhones via iMessage. But the ability to SMS friends within Gmail would be pretty powerful on computers that don’t support iMessage. Maybe we need to let our Canadian carriers know about this feature? Or do you think it’s just another case of being Canadian–always waiting to be included in the latest tech?