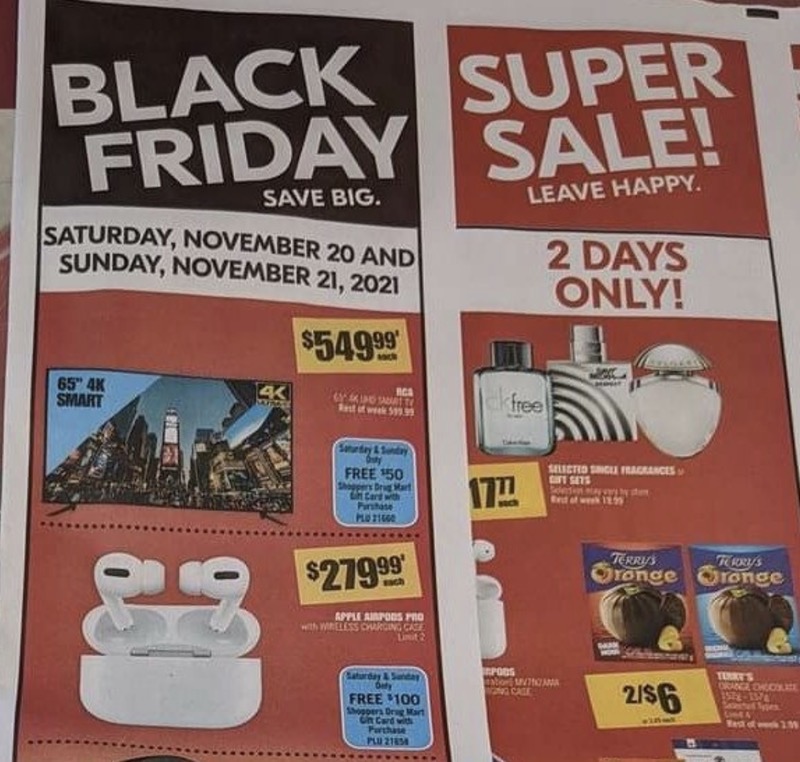 If you’re looking for a deal on Apple’s AirPods Pro, check out an upcoming sale next weekend at Shoppers Drug Mart.

According to an early flyer detailing its “Black Friday Super Sale” (despite Black Friday not being until a week later), Shoppers Drug Mart is offering Apple’s AirPods Pro (likely with wireless charging case and not MagSafe) for $279.99, with a $100 store gift card, essentially taking the price down to $179, shares RFD user ‘hill15’.

Normally, AirPods Pro cost $329 from Apple (with the newest MagSafe charging case), but to get them at $179 after gift card savings, now that’s a good deal, saving you 46% off.

The sale takes place on November 20 and 21 only, likely in-store only.

Last year, Shoppers Drug Mart offered AirPods Pro for $299 and a $75 gift card, so this time around it’s even cheaper. Time to mark your calendars for next Saturday and Sunday, folks.

Right now, AirPods Pro with MagSafe Charging Case are available on sale for $259 at The Source, while a new cheaper price of $258 is available at Visions.

Amazon Canada has discounted its Fire Televisions as part of sale right now, offering up to 29% off select models. The Fire TVs on sale right now are from the company’s entry 4-Series and flagship Omni Series lineup with hands-free Alexa and Dolby Vision (only 65 and 75”). These televisions run Fire TV and include […]
IIC Deals
18 hours ago

Here are the latest Canadian cellphone plan and device deals, plus other promos from wireless carriers such as Rogers, Telus and Bell, from our partner PlanHub. As always, the promos may change at the last minute, but here they are as of Wednesday, January 25, 2023. Check them out below…   Bell Noticeable price changes: TCL and […]
IIC Deals
6 days ago