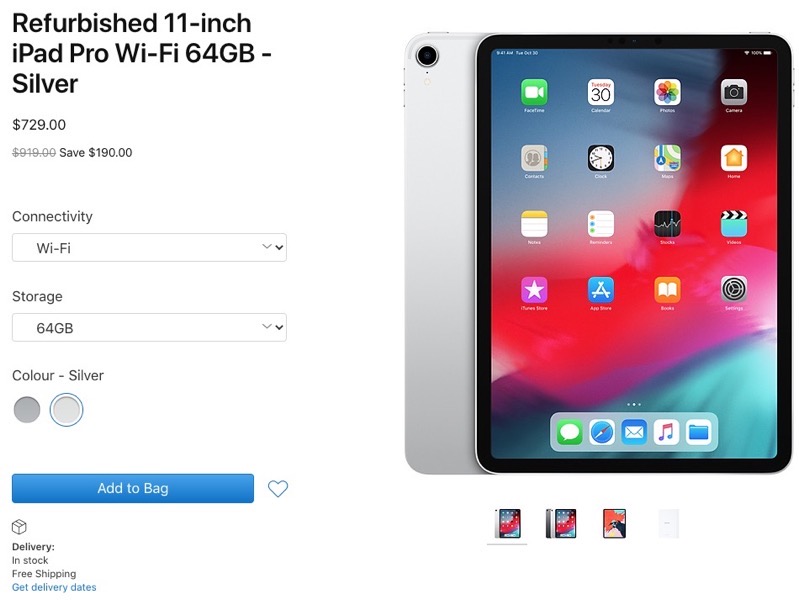 Apple Canada has restocked its online refurbished store with the company’s 2018 11-inch iPad Pro Wi-Fi 64GB, available for $729. This base model was restocked back in May but sold out quickly, as tablets such as Apple’s iPad have been in high demand during the COVID-19 pandemic for both work, school and pleasure.

As of writing, only the colour silver is available for this iPad Pro powered by the A12X Bionic chip. This refurbished iPad Pro has $190 in savings according to Apple.

Apple’s 2020 iPad Pro update included the debut of a LiDAR scanner on the back, along with an A12Z Bionic chip, which has been confirmed to be the same as the A12X Bionic, except with one extra GPU core enabled. There’s also one extra camera lens, but overall it’s not a massive upgrade over 2018 as the design has remained the same.

Refurbished iPads from Apple come with a new battery and outer shell, while also have the standard one-year warranty and 15-day return policy.

Here are the latest Canadian cellphone plan and device deals, plus other promos from wireless carriers such as Rogers, Telus and Bell, from our partner PlanHub. As always, the promos may change at the last minute, but here they are as of Wednesday, November 30, 2022. Check them out below… Bell Noticeable price changes: Get iPhone 14 […]
IIC Deals
4 hours ago

Spotify is offering up 3 months of its Premium service for $0.00 per month in Canada right now. “Enjoy ad-free music listening, offline playback, and more. Cancel anytime,” says Spotify. The Premium 3-month freebie is for the Individual plan only and after the free period, you will be charged $9.99 CAD/month. Spotify says it is […]
IIC Deals
1 day ago