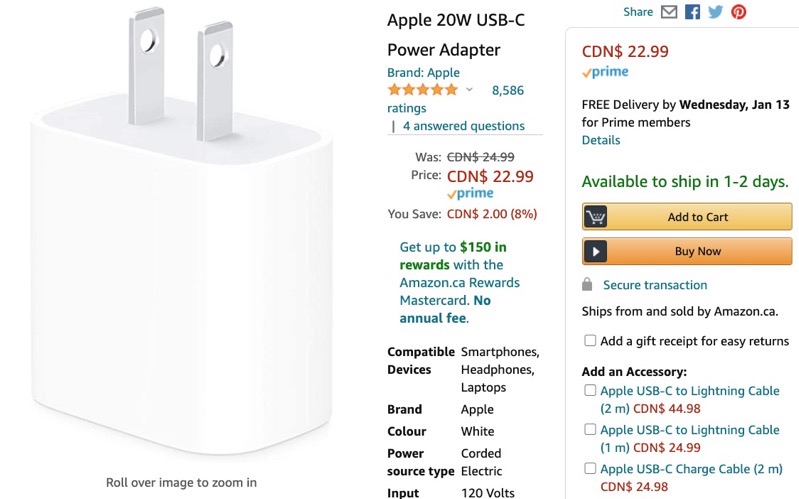 While the savings aren’t huge by any means, power adapters from Apple rarely go on sale. You can save $2 and get Prime shipping speeds, which is a win in our books (#insertrussellpetersdollarstorejoke). This power adapter will let you get faster charging for your compatible iPhone. Apple removed power adapters from its 2020 iPhone lineup for the environment.

“The Apple 20W USB‑C Power Adapter offers fast, efficient charging at home, in the office, or on the go. While the power adapter is compatible with any USB‑C-enabled device, Apple recommends pairing it with the iPad Pro and iPad Air for optimal charging performance. You can also pair it with iPhone 8 or later to take advantage of the fast-charging feature,” explains Apple’s description of the power adapter. Of course, charging cable sold separately.

LG announced its Smart TV owners in owner 80 countries can get 3 months of Apple TV+ for free, just in time for the holidays. Beginning this week, LG says the promotion is available for new Apple TV+ subscribers that have: Compatible 2018-2022 4K and 8K LG Smart TV models running webOS 4.0 to webOS […]
IIC Deals
10 hours ago

Nintendo’s OLED console with Neon Red & Neon Blue Joy-Con has been discounted on Amazon.ca, down $50 to $399.98, which is normally the price of the regular Switch. The OLED version of the Nintendo Switch has a 7-inch OLED display offering more vivid colours and contrast, plus a wide adjustable stand. It comes with a […]
IIC Deals
13 hours ago