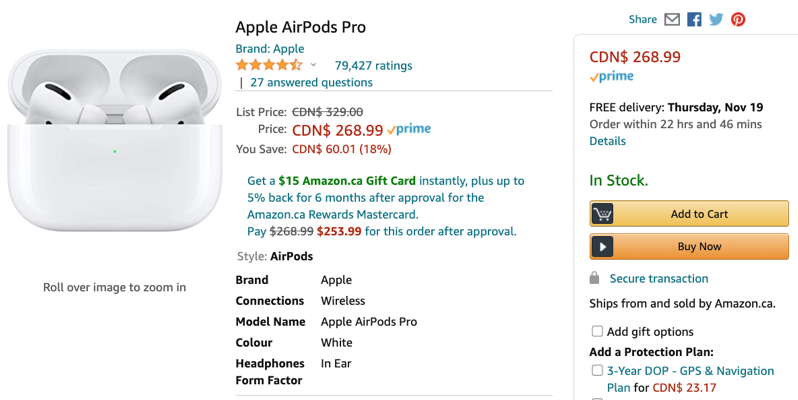 Well, that was fast. Apple recently started selling its accessories and new M1-powered MacBooks on Amazon.ca, and now we’re seeing one of the first discounts.

AirPods Pro are on sale for $60 off at $268.99, saving you 18% off. This price drop matches what’s available at Costco.ca, but doesn’t require membership for the latter. This is one of the lowest prices we’ve seen for AirPods Pro and the sale comes ahead of Black Friday sales.

The AirPods Pro ships from and are sold by Amazon.ca and eligible for Prime shipping speeds.

It’s worth noting we ordered an Apple 20W charger and it arrived on Sunday and it is legitimate. Apple really needs to eliminate all these fake reviews it has on Amazon as customers are going to be confused.

With the launch of Apple Watch Series 8, deals on the previous Series 7 are now available. Amazon Canada has cut the price of the Apple Watch Series 7 by $100 off for the smaller 41mm version, down to $429.99. This is for the Starlight aluminium case with Starlight Sport Band. The same price is […]
IIC Deals
7 days ago