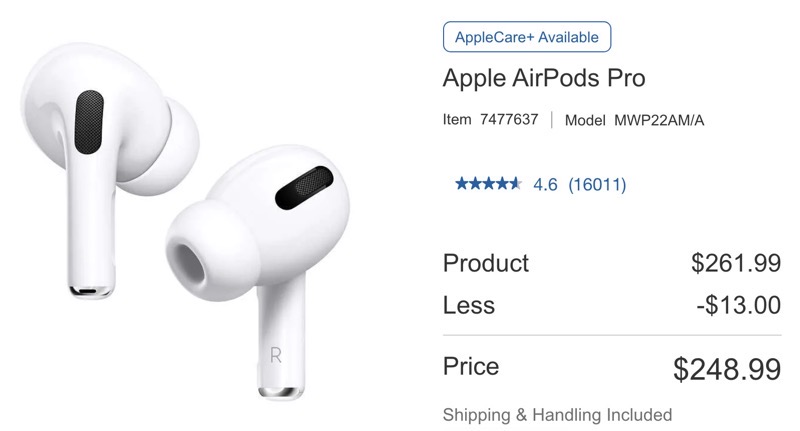 Apple.ca normally sells AirPods Pro for $329. The wireless earbuds come with Active Noise Cancellation and Transparency modes, while are also sweat-resistant for workouts.

Later this year, Apple will bring the Spatial Audio feature from AirPods Pro, or 3D surround sound, to the Mac and Apple TV.

At this price of $248.99, Costco has undercut Amazon.ca’s price by one penny, as the latter is also selling AirPods Pro on sale but at $249.

Buying from Costco means you get an extended, no-questions-asked return policy, unlike the retailers. This sale and other sales on tech are likely for Father’s Day, which is coming up on June 20, 2021.

Update Nov. 29, 1:45pm PDT: The deal has now sold out. The August Smart Lock (3rd gen) with Connect Wi-Fi Bridge has just dropped to an all-time low on Amazon.ca, down 59% to $94.99, saving you $135. This smart lock works with Google Assistant and Amazon Alexa so you can control your lock with your […]
IIC Deals
6 hours ago

If you recently purchased a Samsung Galaxy Z Fold4 or Galaxy Z Flip4, you can get a promo code to stream the 2022 FIFA World Cup free on TSN for six months, as part of a recent freebie. According to Samsung, it explains “once you have received your eligible Galaxy Z Fold4 or Z Flip4 […]
IIC Deals
6 hours ago