Apple’s Beats Solo Pro Wireless Headphones, Powerbeats Pro on Sale for Up to $80 Off [u] 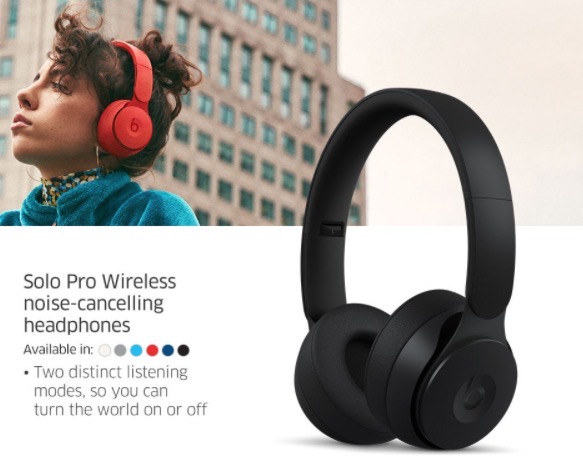 Beats Solo Pro wireless headphones are on sale for $80 off at $299.99. These wireless headphones include Active Noise Cancellation (ANC) and also a Transparency mode, allowing you to hear the environment around you, powered by Apple’s H1 chip found in AirPods Pro. You get up to 22 hours of battery life with ANC on and up to 40 hours with the feature off. There are six colours available and the sale is available both in-store and online.

Powerbeats Pro are on sale for $50 off at $279.99 with 8 colours available, including the newest colours released this spring. These headphones feature the H1 chip found in second-generation AirPods, while also have up to 9 hours of listening time (24 hours with the charging case) and include always-on ‘Hey Siri’.

If you have access to the Partner Savings Program (PSP) from your employer or Goodlife Fitness, for example, you can save a bit more.

It's cheaper at @chaptersindigo https://t.co/0StLcwixCK at $285. Price match with Visions Canada which is selling for $399 and they'll beat the lowest price by 15% of the difference brining it down to $268.

Update: You can get these slightly cheaper at Chapters Indigo right now, or by pricematching with Visions Canada.

Update Nov. 29, 1:45pm PDT: The deal has now sold out. The August Smart Lock (3rd gen) with Connect Wi-Fi Bridge has just dropped to an all-time low on Amazon.ca, down 59% to $94.99, saving you $135. This smart lock works with Google Assistant and Amazon Alexa so you can control your lock with your […]
IIC Deals
7 hours ago

If you recently purchased a Samsung Galaxy Z Fold4 or Galaxy Z Flip4, you can get a promo code to stream the 2022 FIFA World Cup free on TSN for six months, as part of a recent freebie. According to Samsung, it explains “once you have received your eligible Galaxy Z Fold4 or Z Flip4 […]
IIC Deals
7 hours ago