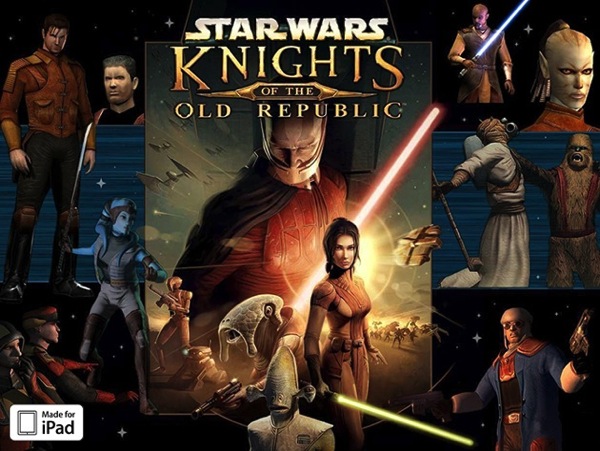 Heads up, Star Wars fans! Our Deals Store has an exclusive offer for you: get Star Wars: Knights of the Old Republic for iPad for 50% off at $4.99, part of Stack Social’s promotional efforts with the developers to bring on the discount. Hit up this link to get access to the game and save 50% off.

Star Wars®: Knights of the Old Republic™, widely considered one of the greatest role-playing games of all time, comes to iPad!

It is four thousand years before the Galactic Empire and hundreds of Jedi Knights have fallen in battle against the ruthless Sith. You are the last hope of the Jedi Order. Can you master the awesome power of the Force on your quest to save the Republic? Or will you fall to the lure of the dark side? Hero or villain, savior or conqueror… you alone will determine the destiny of the entire galaxy!

• An epic Star Wars™ role-playing experience with unique characters, creatures, vehicles and planets.
• Learn to use the Force with over 40 different powers, plus build your own lightsaber.
• Adventure through iconic Star Wars locations, including Tatooine and the Wookiee homeworld Kashyyyk.
• Choose your party from nine customizable characters, including Twi’leks, droids and Wookiees.
• Travel to eight enormous worlds in your own starship, the Ebon Hawk.
• A streamlined user interface custom-made for the iPad’s touch screen helps immerse you in the action.

Note: This game requires iPad 2 or newer to run. A WiFi connection is required for download. Please ensure you have approximately 2.5 GB of storage space.

Note: Star Wars®: Knights of the Old Republic™ for the iPad is in English only.

The deal is only available for five days, so if you have been eyeing this game, now is your chance to jump on it.

LG announced its Smart TV owners in owner 80 countries can get 3 months of Apple TV+ for free, just in time for the holidays. Beginning this week, LG says the promotion is available for new Apple TV+ subscribers that have: Compatible 2018-2022 4K and 8K LG Smart TV models running webOS 4.0 to webOS […]
IIC Deals
6 hours ago

Nintendo’s OLED console with Neon Red & Neon Blue Joy-Con has been discounted on Amazon.ca, down $50 to $399.98, which is normally the price of the regular Switch. The OLED version of the Nintendo Switch has a 7-inch OLED display offering more vivid colours and contrast, plus a wide adjustable stand. It comes with a […]
IIC Deals
10 hours ago