Amazon.ca has a sale right now on Koogeek’s Smart Wi-Fi LED Light Strip, available for $34.99 at 30% off, saving you $15, when you use promo code 5IID2ZSF at check out, as part of the Koogeek World Cup sale.

Update June 16: looks like the promo code has stopped working. We’ve reached out to Koogeek for an update so stay tuned. 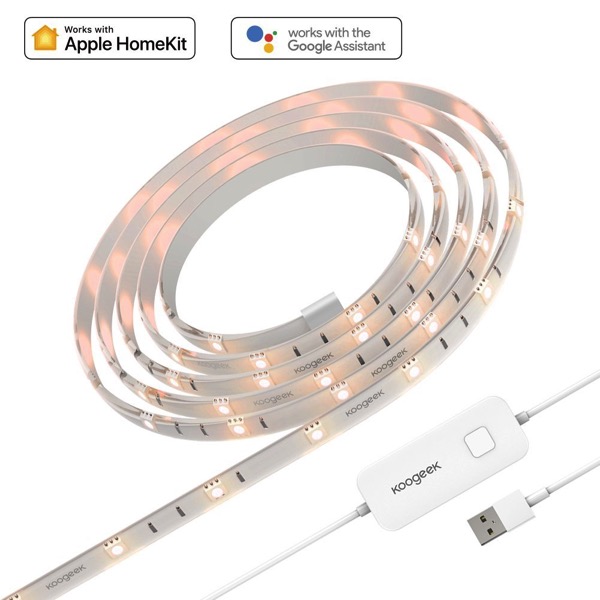 The 2 metre long Koogeek light strip works with Apple’s HomeKit, which means you can use Siri to control this USB-powered strip, from your iOS device, HomePod or Apple Watch.

This light strip also works with Google Assistant and Amazon’s Alexa, while it has 16 million colours available to go with an IP65 waterproof and dustproof rating. The strip works only on 2.4GHz Wi-Fi networks though, however. But at $34.99, this light strip is a decent deal compared to others on the market.

Also on sale is Koogeek’s HomeKit enabled Smart Surge protector, which comes with three plugs and three USB outlets, available for 30% off at $58.09 after coupon code 5IID2ZSF, again.

Spotify is offering up 3 months of its Premium service for $0.00 per month in Canada right now. “Enjoy ad-free music listening, offline playback, and more. Cancel anytime,” says Spotify. The Premium 3-month freebie is for the Individual plan only and after the free period, you will be charged $9.99 CAD/month. Spotify says it is […]
IIC Deals
13 hours ago

Update Nov. 29, 1:45pm PDT: The deal has now sold out. The August Smart Lock (3rd gen) with Connect Wi-Fi Bridge has just dropped to an all-time low on Amazon.ca, down 59% to $94.99, saving you $135. This smart lock works with Google Assistant and Amazon Alexa so you can control your lock with your […]
IIC Deals
20 hours ago