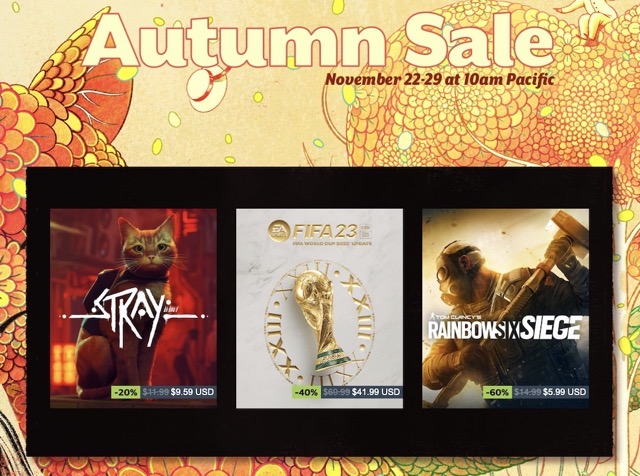 The Steam Autumn Sale features an entire week filled with tens of thousands of discounts. You can browse through every genre imaginable to grab games on sale for the perfect additions to your Steam library.

In fact, while you’re there, pick up a title or two for the lovely folks on your holiday shopping list. Not only can you gift specific games, but you can also get digital gift cards.

The Steam Autumn Sale is also the time to nominate your favourite games from the past year for the Steam Awards, in 11 different categories.

Some of the best games featured in the Steam Autumn Sale include:

The Steam Black Friday sale will run for one week and end on November 29.

Spotify is offering up 3 months of its Premium service for $0.00 per month in Canada right now. “Enjoy ad-free music listening, offline playback, and more. Cancel anytime,” says Spotify. The Premium 3-month freebie is for the Individual plan only and after the free period, you will be charged $9.99 CAD/month. Spotify says it is […]
IIC Deals
13 hours ago

Update Nov. 29, 1:45pm PDT: The deal has now sold out. The August Smart Lock (3rd gen) with Connect Wi-Fi Bridge has just dropped to an all-time low on Amazon.ca, down 59% to $94.99, saving you $135. This smart lock works with Google Assistant and Amazon Alexa so you can control your lock with your […]
IIC Deals
21 hours ago