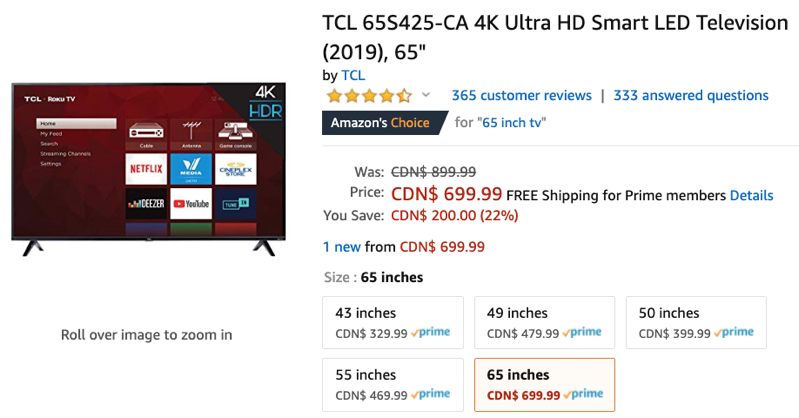 Amazon.ca has just dropped the price of TCL’s 65-inch 4K Ultra HD Smart LED television down to $699.99, its lowest price ever, according to price tracker CamelCamelCamel.

Powered by Roku, you’ll get access to numerous apps such as Netflix, YouTube and more. TCL televisions are popular in the United States and only recently launched in Canada. Reviews of TCL models are mostly positive on Amazon for offering great value.

This TV has the following inputs: 3 HDMI 2.0 with HDCP 2.2 (one with HDMI ARC), 1 USB (media player), RF, Composite, Headphone Jack, Optical Audio Out, and Ethernet.

Roku is rumoured to support Apple’s AirPlay 2 protocol soon for its media players and televisions.

Amazon has launched an expanded sale on a variety of its devices, slashing the prices on Echo, Fire TV, Kindle, Blink products and more. These sales come after Amazon announced new products last week. Check out the full list of devices on sale below, which now includes Ring and Blink doorbells and cameras: Fire TV […]
IIC Deals
11 hours ago