Tim Hortons to Sell 6-Pack Donuts for 60 Cents on Nov. 26 via Uber Eats 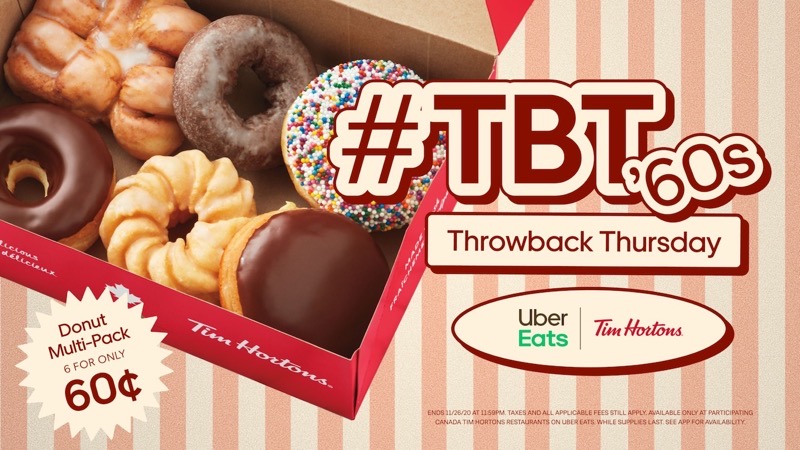 Tim Hortons is set to launch a throwback deal for its donuts, going all the way back to 1964, the year Canadian hockey legend Tim Horton opened up his first donut shop.

On Thursday, November 25, Tim Hortons will offers customers a 6-pack of donuts for $0.60—or 10 cents per donut, as per its pricing from 1964, available through Uber Eats. Currently, a 6-pack of donuts costs $6.59, so you’re saving about $6 (as for your waistline, no comment #nojudgment).

“At Uber Eats, we know 2020 has been a challenging year for many. That’s why we’re taking our customers back to a better time with Uber Eats Throwback Thursdays,” said Lola Kassim, General Manager of Uber Eats Canada, in an issued statement to iPhone in Canada.

“We’re thrilled to kick off with Tim Hortons donuts – and encourage Canadians to head back to the 1960s with us and enjoy a 6 pack of donuts for just $0.60,” added Kassim.

Uber says in the coming months, it will also work with other restaurants to bring back old-school pricing.

Costco.ca has launched its Cyber Monday savings event, offering deals on a variety of products such as televisions and more. Check out some of the deals it shared in an email with customers below as part of this Cyber Monday online sale: M1 Apple MacBook Air – $1,139 ($150 off) Sony X90K Series TVs on […]
IIC Deals
9 hours ago