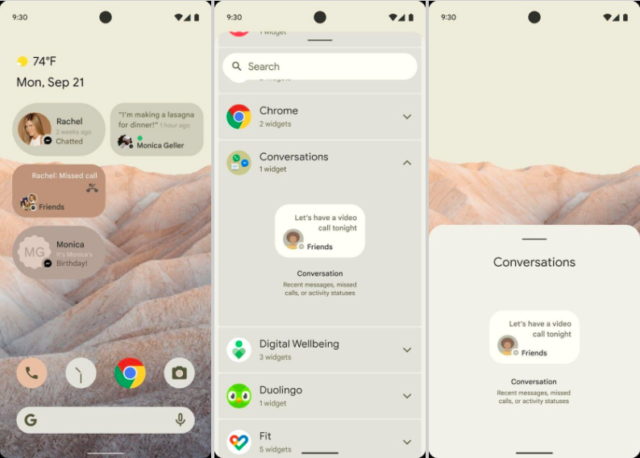 Leaked images portraying the revised UI design of Android 12 have seemingly leaked as the new developer preview is expected to be released.

Google has set the precedent of releasing a new Android OS developer preview each February, ahead of the public rollout. This yeah, Android 12 is expected to receive a substantial overhaul of its UI. An alleged early draft of the documentation that Google has prepared for publishers and partners has reportedly leaked, according to XDA-Developers.

Along with the documentation, screenshots of the alleged Android 12 UI have also leaked. XDA-Developers acknowledged that the UI shown in the screenshots may not be entirely accurate. Though, sources have pointed to there being some credibility to what is shown.

The screenshots offer a look at the new colour scheme, which heavily uses a beige and sandy brown pallet when not in Dark Mode. Notifications bubbles now have rounded corners and the Quick Settings tiles have been reduced from six down to four. Minor changes also include the change of where the date and time are located.

Privacy updates may play an important role in Android 12. It appears as though a new privacy status bar will be included in the new OS. This will seemingly notify users when an app uses the phone’s microphone or camera. The status bar will indicate when this is in effect and when tapping on the bar, a user will be able to see exactly what the app is using at the time. XDA-Developers also reports that a new privacy setting may enable users to fully turn off the microphone and camera on their device. Additionally, Android 12 could see the introduction of a setting to turn off location access and disable all sensors on the device.

Finally, there’s a small glimpse into a new conversations widget for Android 12. This widget would highlight a more recent conversation, missed call, or activity status. Due to the size shown on the screenshot, it may only accommodate one, though there may be some customizable aspects to the widget to make it larger.

Google has not publically confirmed which features users should expect upon the wide launch of Android 12. There’s also no discernable reports of when the OS update will begin its developer preview. Though, it is expected to begin rolling out later this month.