Create An Editable Photo Stream Smart Album In iPhoto [How To]

When you take photos on an iOS device, your new photos are automatically uploaded to iCloud and pushed to all your other devices including your Mac’s iPhoto, thanks to Photo Stream, a feature introduced by Apple with launch of iOS 5. However, Apple forgot to add support for editing these photos in iPhoto’s Photo Stream folder due to which you can’t even drag a photo from Photo Stream to another album. Instead, iPhoto prompts you to browse the original imported photo in your library first in order to edit or move the photo to another album. But now, we have a neat workaround from Here’s The Thing (via CNET ) which lets you create a “Smart Album” in iPhoto with editable copies of all your Photo Stream images. 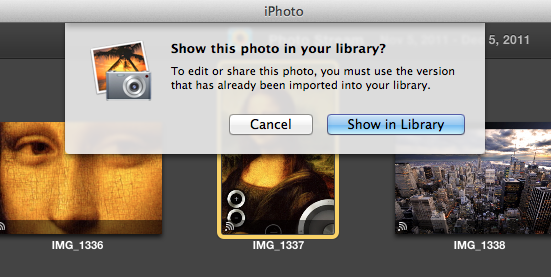 That’s it, you should now see a new album called Photo Stream with all the new and old images from your Photo Stream, completely editable. Enjoy!