How to Arrange your iPhone Icons Easily: Movement for Mac

If you’re a heavy iPhone user, it’s easy to fill up your homescreens with tonnes of apps. One major grip is moving an app from the last page to the main homescreen. You have to drag, drag, and drag again. It’s very time consuming and painful.

However, there is hope upon the horizon. It’s in the form of a program called Movement and it’s for Mac users and jailbroken iPhones only. This app will allow you to easily arrange your homescreen on your Mac. 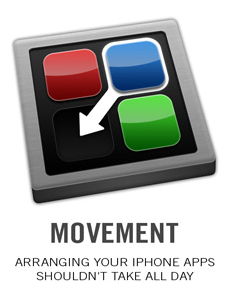 All you have to do is plugin your iPhone and run the app. It’ll read the apps off your iPhone then display them in a horizontal window that you can drag left/right to adjust.

After you’ve rearranged your apps, just click “write apps” and prior to saving changes it will ask you to backup your Springboard. Click YES if you’re cautious (since this is still a beta app)!

Check out the following video to see Movement in action done by Steven Chi:

I tested out the Movement app on my MacBook with my iPhone 3GS and it is very straightforward, just like what you saw above. I was able to rearrange my apps easily without any problems. Very cool. It’s too bad this app is only for Mac users at the moment and jailbroken iPhones. I’d like to see a PC/Mac version that will work on both jailbroken and non-jailbroken iPhones too.

Click here to download Movement (Mac only). Heads up to Patrick at Just Another iPhone Blog for picking this up on a lazy Sunday. 🙂