If you’re an iPhone user and you have a jailbroken iPhone, you’re probably familiar with 3G Unrestrictor and VoIPOver3G to allow Skype to make calls over 3G. With a cheap $3/month subscription plan, Skype can make unlimited calls to phones in Canada and the USA. This is awesome, but what about a FREE VoIP alternative with free Caller ID?

Thanks to a quick tweet from @rickmex via twitter, iCall is the solution for people who want to save their daytime minutes. The free ad supported version allows for free calls to landlines in Canada/USA over 3G/WiFi, plus your Caller ID is included.

I gave iCall a quick test and the sound quality over 3G/WiFi was pretty good and comparable to Skype. To verify your account you will be required to dial a US number on the iPhone (it wouldn’t dial out because there was no “1” so I manually dialed the verification number via Skype). The only downside is that there’s no speakerphone option. Other than that, this is a pretty neat app for making free calls to landlines using your 3G data plan! Free calls are limited to 3 minutes though. Free is still free right? 😉 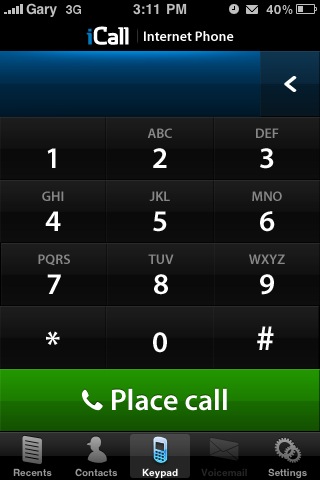 Let me know how iCall works out for you. It’s definitely an interesting app for making free calls to landlines on your iPhone!