Some users are experiencing higher than normal cellular data usage on their new iPhone 6, iPhone 6 Plus and older models, according to users on the Apple Support Communities, MacRumors forums and InsideCupertino.

The problem exists in iOS 8 and iOS 8.0.2. Users, after checking their data usage, are seeing higher than normal usage (including ourselves). Part of the problem may be possibly related to new options in iOS 8 which use cellular data as part of iCloud. Here are some possible fixes to try and reduce your data usage.

Under Settings > iCloud > Documents & Data, toggle off ‘Use Cellular Data’ and any other apps you don’t want to use data.

I would highly suggest toggling off WhatsApp before launching it on a newly restored device setup as a new iPhone. Why? At the first launch (if you’re not in Wi-Fi range), the app sees your iCloud backup and starts restoring from it and will do so over cellular. The same goes for Camera+, especially if you have lots of photos being stored in iCloud. 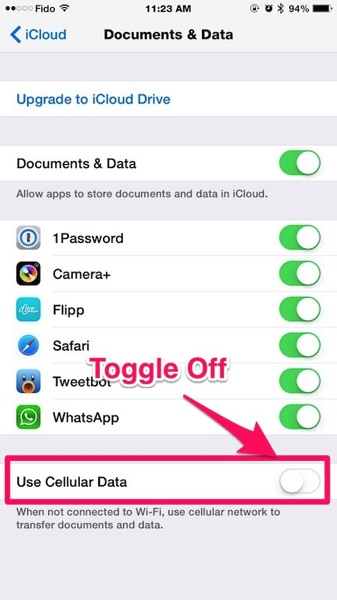 Another area is under Settings > iTunes & App Store, make sure Use Cellular Data is off. Also, another step would be to toggle off My Apps and App Store if you don’t care for suggested apps based on your location (battery drain). 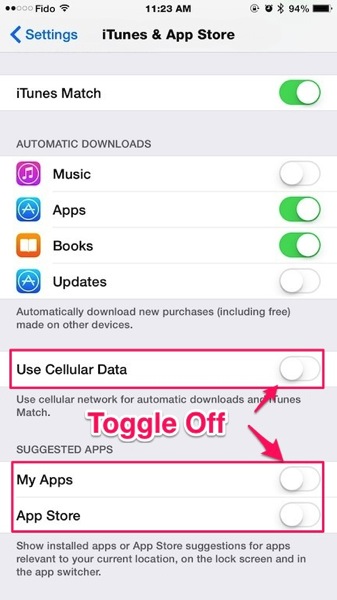 Another way to manage data is to go to Settings > Cellular, then scroll down to see which apps are allowed to use data. You can turn off data usage for individual apps here. Under ‘System Services’, you can also see what is using your data as well. In our case, Documents and Sync leads with 115MB of usage.

We also recommend installing DataMan Next ($1.99) or DataMan Pro ($4.99) to track your data usage. There’s a widget that can be added to Notification Center so you can quickly see your data usage. Compared to the Fido My Account app used to track our usage just now, DataMan was off only by showing 10MB under official Fido data.

In iOS 8.0.2, we’ve already used close to 500MB of data in just the first five days of our billing cycle. That is unusual as normally we are typically within Wi-Fi range.

Last month’s billing cyle saw our data cap over our our allotted Fido 2GB data bucket, which hasn’t happened in a long time. So maybe there’s something else causing high data usage, similar to what Rogers, Bell and Telus users experienced with iOS 6 back in 2012?

The ‘Last Resort’ Option: Setup your iPhone as New

One user on the Apple Support Communities forums suggests restoring your iPhone and setting it up as completely new, as it apparently solved his iOS 8 data drain bug:

We did this after our iPhone 6 Plus restored from our iPhone 5s iCloud backup was causing excessive battery drain in iOS 8. The result? Battery since then has been phenomenal. iCloud brought back contacts, pictures and settings, but we had to redownload our apps and set them up again, which takes a lot of time. But we were able to purge a lot of unused apps. Did it solve the early data dilemma? Not really, but we continue to monitor our usage.

Worst case scenario, if you’re still experiencing high data usage, turn on AirPlane Mode at home and then re-enable Wi-Fi, so you can still be connected somewhat.

Are you experiencing high amounts of data being used on your iPhone in iOS 8? How much data have you used so far and on what device?