How to Move Content from Android to iPhone According to Apple

With the iPhone 6 and iPhone 6 Plus launch set for this Friday, the launch of new bigger screens will surely bring Android users back to the iOS ecosystem.

How to move all your content from your Android phone to the iPhone? Apple has you covered, as a new support document from the company explains exactly that, with specific instructions on moving mail, contacts, calendars, photos, videos, music, books and PDFs, documents and apps back to the iPhone. 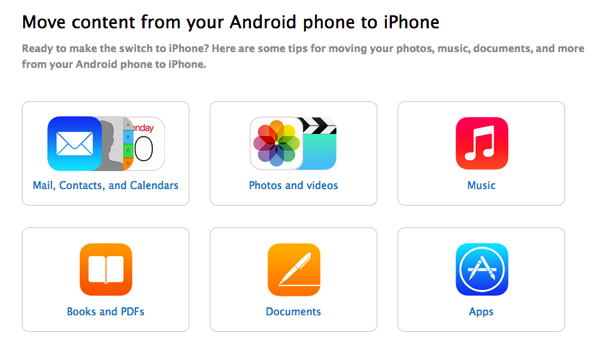 Apple suggests using data transferring apps such as Copy My data for iOS and Android to allow users to easily transfer over contacts and calendars, which is an interesting suggestion. When it comes to moving over music, books, PDFs and photos, Apple says Mac users should use Android File Transfer as a solution.

Poll: Are you moving from Android to iPhone 6?