According to the latest data on the App Store Distribution page, the majority of the iOS devices are now running the latest version of Apple’s mobile operating system. It appears like the adoption rate of iOS 8 has increased by 4%, at least during the past two weeks: 60% of all iOS devices connecting to the App Store are running iOS 8.

That was on November 24, and it compares with the 56% measurement by the App store on November 10, and the 52% of adoption rate assessed two weeks earlier on October 27.

During the iPad event in October Apple stated that the iOS 8 adoption had reached 48%. Since then the percentage of devices running iOS 8 has been slowly but steadily growing — up by 4% in 14 days. 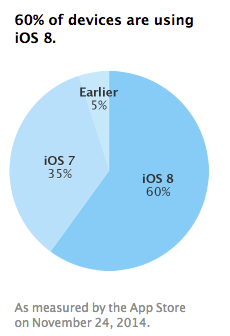 You may recall that Apple has made a significant step with iOS 8.1: the update enabled Apple Pay alongside Continuity features such as Handoff and SMS Forwarding. Did you update to iOS 8.1?