There are 18 million app users in Canada, while this number rises to 2 billion on a global scale, an independent study published by the Information and Communications Technology Council reads.

The study, entitled “The Appification of Everything: Canada’s Apps Economy Value Chain,” offers a cross-section view of the country’s apps market. The rapid adoption of mobile apps has created economic opportunities in all sectors of the Canadian economy, such as employment creation, efficiency gain, revenue generation, etc.

Also, it is worth noting that the number of Canadian cellphone subscribers is projected to surpass 28 million in 2014, but as you may recall more than 70% of all postpaid subscribers are using a smartphone. The growing smartphone usage also triggers a huge appetite for mobile apps. There are about 3 million apps available in the app storefronts, with 1.1 million of them being iOS apps.

Those 18 million Canadians who download apps contribute to a growing Canadian application economy. To put that into numbers: About 64,000 jobs have been created in Canada and, of those, 45,800 are employed in enterprises specializing in app development, the ICTC has learned. And, in terms of revenue, Canada’s app enterprises currently generate about $1.7 billion in annual revenue. But this is just the beginning. By 2017, this number is expected to reach $3.3 billion – and $5.2 billion in 2019.

An interesting highlight of the study: Ontario seems to retain “Canada’s app development hub” title, as currently there are 28,700 apps-economy-related jobs there, but Quebec is following it closely with 14,000 jobs. 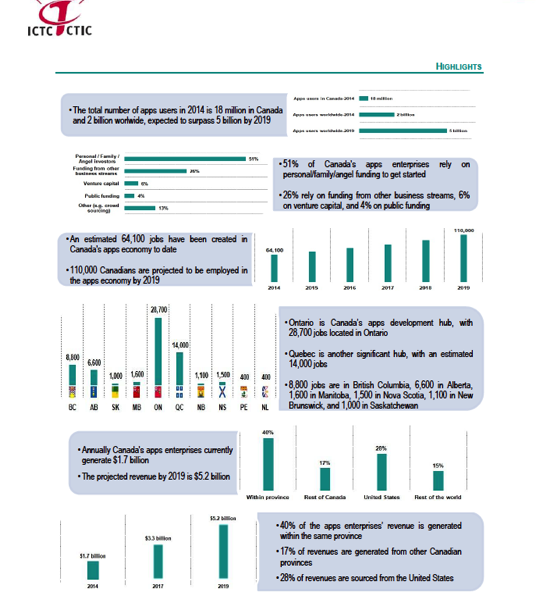