After presenting iOS 7, “the most significant update since the original iPhone”, Apple is now targeting business using a recently created business-focused page on its website (via The Verge). 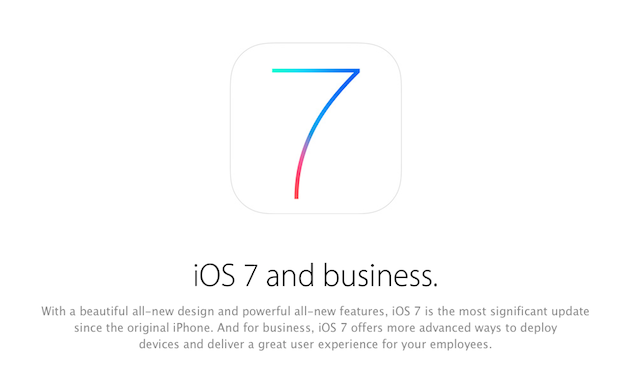 Although we have seen several noteworthy features of the upcoming mobile operating system, Apple goes beyond them and highlights other important improvements that didn’t make it to the Worldwide Developers Conference 2013 keynote.

On this page, Apple showcases iOS 7’s new features which will benefit corporate users. Among the noteworthy additions there is Per app VPN, which allows iDevices to automatically connect to VPN when they are launched.

Also, with the improved App Store Volume Purchase program, users can enter their personal Apple ID to purchase an application on a company account.

Other highlights include new MDM configuration options and streamlined MDM enrollment. The latter allows institutionally-owned devices to be automatically enrolled in MDM during activation.

Apple also touts the enterprise SSO (single sign-on) feature, with which user credentials are shared across apps, including the ones from the App Store. Furthermore, when iOS 7 launches this fall it will allow Microsoft Exchange 2010 users to sync notes with Outlook on their Mac or PC.