WWDC 2015 is months away, but Apple is actively testing iOS 9, claims Letem Svetem Applem (via Phone Arena), backing it with a Google Analytics report screenshot. The news comes shortly after reports of a minor iOS 8.1.3 update scheduled for this week, and Apple just seeded the fourth beta of iOS 8.2. The latter will allegedly be launched alongside the Apple Watch. 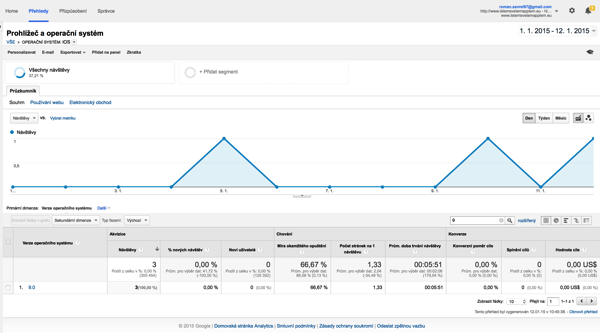 Apple has released a new version of iOS each year, so this year won’t be different. iOS 7 brought a welcome redesign, and the blogs and the media exploded on the demise of skeuomorphism in Apple’s interface design. Now flat is the new standard, and Apple took a similar approach with the desktop as well.

iOS 8 was hailed by users, as it presented a more polished operating system — although some bugs remained — with great new features that we loved. There are apps such as Health (and let’s not forget about Tips — I am struggling to understand why Apple developed such an app, since nobody uses it) that are useless in their current form, so we hope iOS 9 will elaborate on their ideas and find a way to finally make us use them.