Apple to Use Multipath TCP Networking in iOS 7 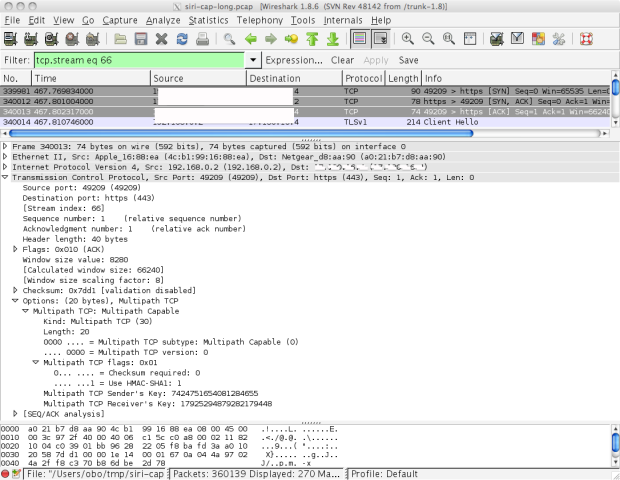 Apple is apparently using a new networking protocol called Multipath TCP, according to a report published by Olivier Bonaventure soon after iOS 7 became available to the public on September 18. The new OS reached 35% adoption rate in less than 24 hours.

Multiple TCP allows devices such as the iPhone to simultaneously use Wi-Fi and cellular IP addresses/interfaces to transfer data. As its name suggests, Multiple TCP includes a modification of TCP that presents a regular TCP interface to applications, but in fact spreads the data across several subflows.

As a result, it has multiple benefits. For instance, it allows smartphones to use their Wi-Fi and 3G interfaces simultaneously or in failover modes, which, of course, has the benefit of fewer dropouts.

The Belgium-based computer science professor at the IP Networking Lab goes on to explain that he discovered it using an iPad running iOS 7 and was able to deduce that Multipath TCP was used to reach destinations that seemed to be directly controlled by Apple.

You won’t see Multipath TCP for regular TCP connections from applications like Safari, but if you use SIRI, you might see that the connection with one of the apple servers runs uses Multipath TCP.

With iOS 7, five years of effort seems to have realised the dreamed adoption of a development initially founded by the European Commission, as the iOS 7 release is the first large-scale commercial deployment of Multipath TCP.