Apple’s iOS 7.1 may have the fewest crashes, but Android apps are more stable, according to the latest report issued by Crittericism (via Fortune).

The report, entitled “Mobile Experience Benchmark“, was published by the San Francisco–based performance analytics company on Thursday and shares important details about mobile performance. What they have found, after tracking about a billion users for a month, is that 47% of apps have an uptime that is not competitive, as they crash more than 1% of the time. To stay competitive, an app should have a crash rate of less than 1%.

When highlighting app performance on mobile operating systems, Crittercism has found that Gingerbread apps are the least stable, which could make sense, as the OS is four years old now. However, Samsung’s devices ranked as the most stable phones and tablets. 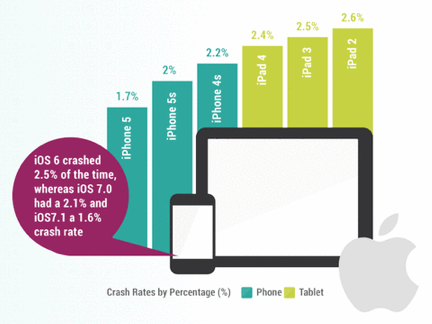 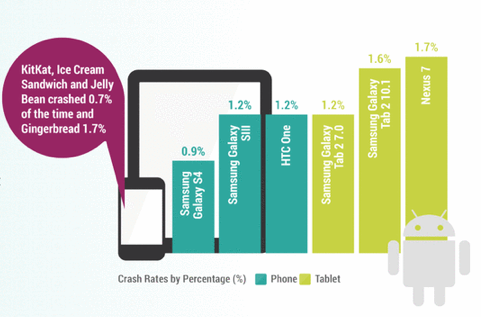 This compares to Android crash rates as follows: KitKat, Ice Cream Sandwich, and Jelly Bean crashed 0.7% of the time; and Gingerbread, 1.7%. In other words, Android apps are more stable than iOS apps.

A similar report was published by Crittercism after the iPhone 5s launched, claiming that the handset’s hardware causes twice as many app crashes as the iPhone 5c.

Update: I an email sent to iPhoneinCanada, Josh van Tonder cleared a couple vague points of the Crittercism report.

IIC: Crittercism is funded through Google Ventures. How does that affect your reports?

Josh van Tonder: Crittercism operates independently from Google. Google Ventures is financed by Google but operates independently and does not make strategic investments for Google. In addition to Google Ventures, Crittercism also had ex-Opus Capital general partner, Bob Borchers, on our board. While at Apple, Bob helped bring the Apple iPhone to market.

IIC: What does crash/crash rate mean?

Josh van Tonder: Crash rate is defined as the percentage of app loads that result in an app crashing. All app loads and crashes of an app are counted but only for apps that Crittercism monitors.

IIC: Where does Crittercism collect this data from?

Josh van Tonder: Crittercism offers a hosted mobile application performance solution for companies that have mobile apps. These companies build Crittercism into the apps that they distribute so that they can deliver better performing apps for their users. We monitor tens of thousands of apps that together have over one billion users. Crittercism then collects anonymized diagnostic information from these apps for companies to monitor, troubleshoot, and trend the performance of their mobile apps. The report aggregates statistics across this anonymized diagnostic data.