iOS 6.1.2 Becomes The Most Popular Version Of iOS [Chitika]

Apple rolled out the iOS 6.1.2 firmware update last week, primarily aimed at fixing the Exchange calendar bug which caused a decrease in battery life. Turns out, the update has now become the most popular version of iOS in less than a week following its initial release on February 19th, according to Chitika Insights, who examined the initial adoption rate of the latest firmware in comparison with iOS 6.1.1. 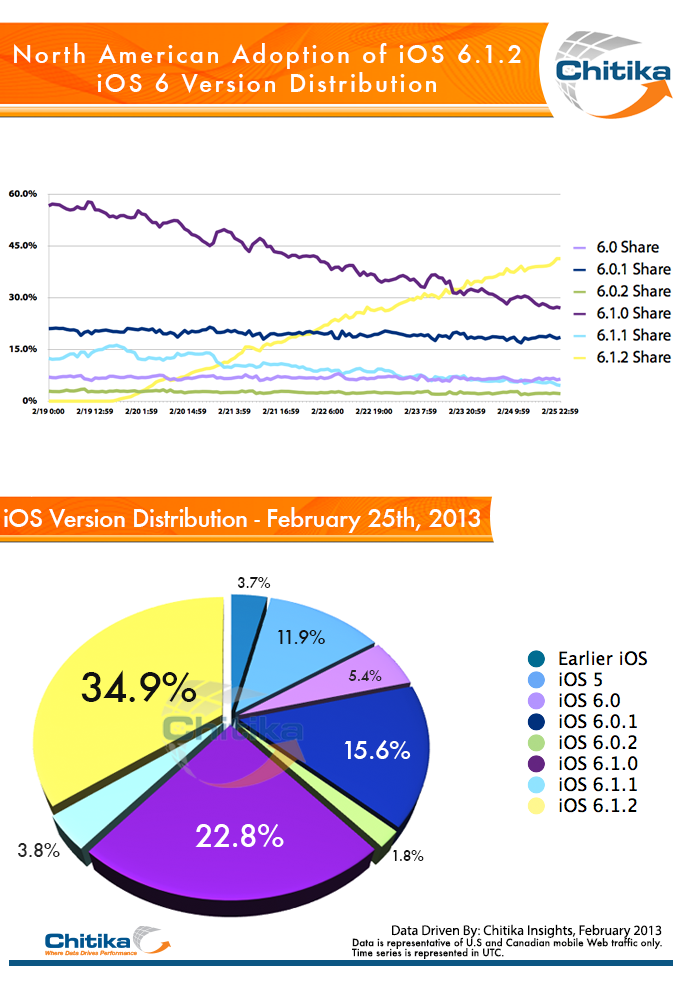 The firm took a sample of millions of iPhone, iPad, and iPod Touch mobile ad impressions originating from the U.S and Canada on its ad network. An analysis was then conducted to identify the iOS version in use from each iOS device impression. A graph showing the growth of iOS 6.1.2 since its launch can be seen above, along with a current version distribution for all iOS Web traffic.

“As seen in the graphs above, five days following iOS 6.1.2’s debut, 34.9% of iOS Web traffic in our North American network is generated by 6.1.2 users. This makes 6.1.2 the most popular version of iOS domestically, surpassing iOS 6.1.0, and adoption of the OS shows no signs of slowing down. Additionally, looking at the line graph, one can see how the growth in iOS 6.1.2 traffic has been accompanied by a near-corresponding drop in iOS 6.1.0 usage, indicating that many users from that OS in particular are switching to the latest version”.

Are you experiencing better battery performance with the iOS 6.1.2 update?